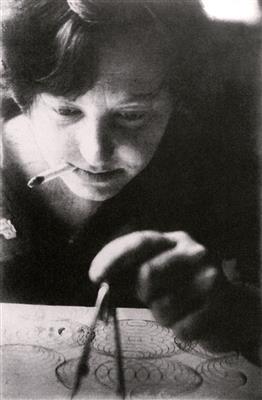 Varvara Fyodorovna Stepanova (Russian: Варва́ра Фёдоровна Степа́нова; 4 November [O.S. 23 October] 1894 – May 20, 1958) was a Russian artist. With her husband Alexander Rodchenko, she was associated with the Constructivist branch of the Russian avant-garde, which rejected aesthetic values in favour of revolutionary ones. Her activities extended into propaganda, poetry, stage scenery and textile designs.


Varvara Stepanova who was born in Kaunas (in modern-day Lithuania) came from peasant origins but was able to get an education at Kazan Art School, Kazan. There she met her later husband and collaborator Alexander Rodchenko. In the years before the Russian Revolution of 1917 they leased an apartment in Moscow, owned by Wassily Kandinsky. These artists became some of the main figures in the Russian avant-garde. The new abstract art in Russia which began around 1915 was a culmination of influences from Cubism, Italian Futurism and traditional peasant art. She designed Cubo-Futurist work for several artists' books, and studied under Jean Metzinger at Académie de La Palette, an art academy where the painters André Dunoyer de Segonzac and Henri Le Fauconnier also taught.


In the years following the revolution, Stepanova involved herself in poetry, philosophy, painting, graphic art, stage scenery construction, and textile and clothing designs. She contributed work to the Fifth State Exhibition and the Tenth State Exhibition, both in 1919.


In 1920 it came to a division between painters like Kasimir Malevich who continued to paint with the idea that art was a spiritual activity, and those who believed that they must work directly for the revolutionary development of the society. In 1921, together with Aleksei Gan, Rodchenko and Stepanova formed the first Working Group of Constructivists, which rejected fine art in favor of graphic design, photography, posters, and political propaganda. Also in 1921, Stepanova declared in her text for the exhibition 5x5=25, held in Moscow:


The term 'Constructivist' was by then being used by the artists themselves to describe the direction their work was taking. The theatre was another area where artists were able to communicate new artistic and social ideas. Stepanova designed the sets for The Death of Tarelkin in 1922.


In 1921, Stepanova moved almost exclusively into the realm of production, in which she felt her designs could achieve their broadest impact in aiding the development of the Soviet society. Russian Constructivist clothing represented the destabilization of the oppressive, elite aesthetics of the past and, instead, reflected utilitarian functionality and production. Gender and class distinctions gave way to functional, geometric clothing. In line with this objective, Stepanova sought to free the body in her designs, emphasizing clothing's functional rather than decorative qualities. Stepanova deeply believed clothing must be looked at in action. Unlike the aristocratic clothing that she felt sacrificed physical freedom for aesthetics, Stepanova dedicated herself to designing clothing for particular fields and occupational settings in such a way that the object's construction evinced its function. In addition, she sought to develop expedient means of clothing production through simple designs and strategic, economic use of fabrics.