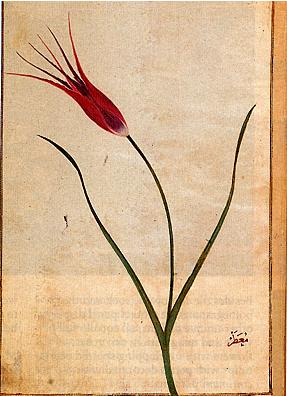 Ustad Mansur (flourished 1590-1624) was a seventeenth-century Mughal painter and court artist. He grew up during the reign of Jahangir (r. 1605 - 1627) during which period he excelled at depicting plants and animals. He was the earliest artist to depict the dodo in colour, apart from being the first to illustrate the Siberian crane. Towards the end of Akbar's reign, he gained the title of ustad (=master) and during the reign of Mughal Emperor Jahangir his masterpieces earned him the title of Nãdir-al-’Asr ("Unequalled of the age"). Although largely known for his natural history illustrations, he also portrayed people in various manuscript illustrations.

The year of Mansur's birth is unknown. His name was suffixed in some early miniatures as Naqqash, which can refer to an artist, painter, or carver, indicating that he came from a family that was in an artistic profession. A single miniature showing 'Babur meeting his sister' (folio 8, National Museum) is attributed to Mansur but he otherwise finds no mention in Babur's memoirs (Baburnama). He was associated with other artists of the period including Basawan, Miskina and Nanha. During Akbar's reign he appears to have been involved only as a colourist in the plates for the Book of Akbar (Akbarnama) and his name is not mentioned by Abu'l-Fazl among the list of artists. Akbar followed the principle that all artwork should include the name of the artist on the margin. The British Museum's copy of the Akbarnama (1604) includes some folios (35,110a,110b and 112a) where his name is prefixed with "ustad" (=master), indicating his rise to excellence.

Early works included parts of portraits and other scenes. The earliest works were made as part of the Baburnama (1590–95) and most of these are as an assistant or a colourist. His Veena-player (c. 1595) and coronation portrait of Jahangir (c. 1605, made along with the artist Manohar) are early works. In 1612, Jehangir received a turkey cock from Goa and this was illustrated by Mansur. In 1619, Jehangir received a Barbary falcon as a gift from Shah Abbas of Persia; Jehangir found it rare and beautifully patterned and when it died, he ordered that a likeness be made of the bird. In 1620, Jehangir visited Kashmir and spotted a brown dipper which he described in his memoirs (Tuzk-e-Jahangiri) translated as:

"... In this stream I saw a bird like a saj. It dives and remains for a long time underneath and then comes up from a different place. I ordered them to catch and bring two or three of these birds, that I might ascertain whether they were waterfowl and were web-footed, or had open feet like land birds. They caught two... One died immediately and the other lived for a day. Its feet were not webbed like a duck's. I ordered Nadirul-asr Ustad Mansur to draw its likeness."

Mansur painted at least one hundred flowers from the Kashmir valley during this period. A red tulip from Kashmir is a better-known painting. The identity of the tulip is however debated with competing suggestions that include Tulipa lanata, T. montana and T. lehmanniana. In 1621, Jehangir was gifted a zebra and this was perhaps the subject of the last miniature painting made by Mansur. It is suggested that his career ended with the reign of Jehangir in 1627. Several other signed works, such as one of the Siberian crane (now no longer a winter migrant to India) and the other of a Bengal florican are in the Indian Museum, Kolkata. Some other works are in the National Museum, Delhi, the Maharaja Sawai Man Singh II Museum, Jaipur and the Chhatrapati Sivaji Vastu Sangrahalaya, Mumbai.