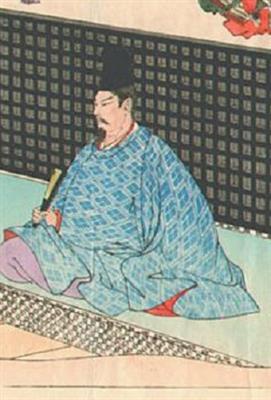 Chikanobu was a retainer of the Sakakibara clan of Takada Domain in Echigo Province. After the collapse of the Tokugawa Shogunate, he joined the Shōgitai and fought in the Battle of Ueno.

He joined Tokugawa loyalists in Hakodate, Hokkaidō, where he fought in the Battle of Hakodate at the Goryōkaku star fort. He served under the leadership of Enomoto Takeaki and Ōtori Keisuke; and he achieved fame for his bravery.

Following the Shōgitai's surrender, he was remanded along with others to the authorities in the Takada domain.

In 1875 (Meiji 8), he decided to try to make a living as an artist. He travelled to Tokyo. He found work as an artist for the Kaishin Shimbun.[4] In addition, he produced nishiki-e artworks. In his younger days, he had studied the Kanō school of painting; but his interest was drawn to ukiyo-e. He studied with a disciple of Keisai Eisen and then he joined the school of Ichiyūsai Kuniyoshi; during this period, he called himself Yoshitsuru. After Kuniyoshi’s death, he studied with Kunisada. He also referred to himself as Yōshū.

Like many ukiyo-e artists, Chikanobu turned his attention towards a great variety of subjects. His work ranged from Japanese mythology to depictions of the battlefields of his lifetime to women's fashions. As well as a number of the other artists of this period, he too portrayed kabuki actors in character, and is well known for his impressions of the mie (mise en scène) of kabuki productions. Chikanobu was known as a master of bijinga. images of beautiful women, and for illustrating changes in women's fashion, including both traditional and Western clothing. His work illustrated the changes in coiffures and make-up across time. For example, in Chikanobu's images in Mirror of Ages (1897), the hair styles of the Tenmei era, 1781-1789 are distinguished from those of the Keiō era, 1865-1867. His works capture the transition from the age of the samurai to Meiji modernity, the artistic chaos of the Meiji period exemplifying the concept of "furumekashii/imamekashii".

Chikanobu is a recognizable Meiji period artist, but his subjects were sometimes drawn from earlier historical eras. For example, one print illustrates an incident during the 1855 Ansei Edo earthquake. The early Meiji period was marked by clashes between disputing samurai forces with differing views about ending Japan's self-imposed isolation and about the changing relationship between the Imperial court and the Tokugawa shogunate. He created a range of impressions and scenes of the Satsuma Rebellion and Saigō Takamori. Some of these prints illustrated the period of domestic unrest and other subjects of topical interest, including prints like the 1882 image of the Imo Incident, also known as the Jingo Incident (壬午事変 jingo jihen) at right.