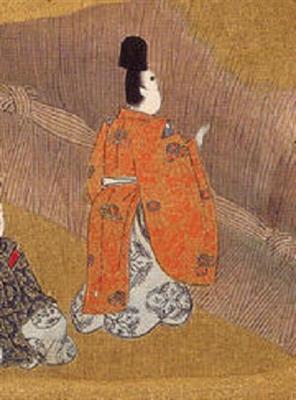 Tosa Mitsuoki succeeded his father, Tosa Mitsunori (1583–1638), as head of the Tosa school and brought the Tosa school to Kyoto after around 50 years in Sakai. When the school was settled in Sakai, Mitsunori painted for townsmen. The school was not as prolific as it once was when Mitsunobu, who painted many fine scrolls (1434–1525) ran the school. Mitsuoki moved out of Sakai with his father, in 1634 and into the city of Kyoto. There, he hoped to revive the Tosa school to gain status back into the Kyoto court. Around the time of 1654 he gained a position as court painter(edokoro azukari) that had for many years traditionally been held by the Tosa family, but was in possession of the Kano school since the late Muromachi period (1338–1573).

In 1654, Mitsuoki restored fortune to the family school when he earned the title of the edokoro azukari, which means "head of the court painting bureau". Now the Tosa school was once again the highlight of the court. The school prospered throughout the Edo period, during the years of 1600 to 1868. Mitsuoki can be considered as the last groundbreaking painter of the Tosa school. He was succeeded by a long line of painters, starting with his son, Mitsunari (1646–1710). Many of the successors used the same techniques and syle of painting as Mitsuoki, which gradually led to their works becoming repetitive throughout the Edo period. The lack of innovation produced many scrolls that could be seen as done by Mitsuoki himself. Another school in effect around the same time called the Kanō school, flourished just as the successors of the Tosa school.

The later Tosa style of the eighteenth century showed very little strength or promise due to loss of patrons and overshadowing from the Kanō school. The school was affected by the growing popularity of the study of Japanese history and the rise of the imperial family. Around the nineteenth century, there was a distinct revival under two artist named Tanaka Totsugen and Reizei Tamechika who specialized in repeating Mitsuoki’s work. Their work reaffirmed the Japanese spirit of Yamato-e, which they made many copies. Their art reflected political philosophy and sometimes had a historical connecting because several of the artists were also faithful to the imperial cause. The two artists were revivalists, and got so caught up in painting historical figures, that they overlooked the special greatness of the early artists who specialized in movement and realism. The most successful successors invented their own artistic style but kept the predecessors tradition of painting in strong color with an intense feeling of natural beauty.

Mitsuoki was known for reintroducing the Yamato-e style. Yamato-e (大和絵) is a style of ancient Japanese painting inspired by paintings in the Tang dynasty. It was later reinvented and further refined in the late Heian period. It is considered the classical Japanese style. In the Muromachi period (15th century), the term Yamato-e has been used to show the contrast between it and work from other contemporary Chinese style paintings, which were inspired by Yuan and Sung dynasty Buddhist paintings.