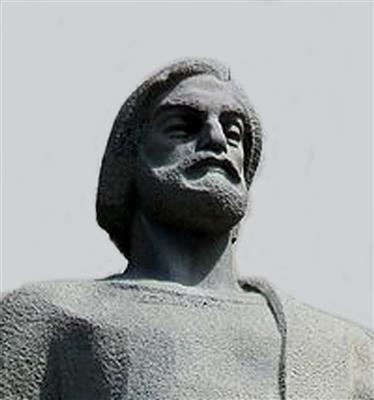 Toros Roslin (Armenian: Թորոս Ռոսլին, Armenian pronunciation: [tʰɔɹɔs rɔslin]); circa 1210–1270) was the most prominent Armenian manuscript illuminator in the High Middle Ages. Roslin introduced a wider range of narrative in his iconography based on his knowledge of western European art while continuing the conventions established by his predecessors. Roslin enriched Armenian manuscript painting by introducing new artistic themes such as the Incredulity of Thomas and Passage of the Red Sea. In addition he revived the genre of royal portraits, the first Cilician royal portraits having been found in his manuscripts. His style is characterized by a delicacy of color, classical treatment of figures and their garments, an elegance of line, and an innovative iconography.


The human figures in his illustrations are rendered full of life, representing different emotional states. Roslin's illustrations often occupy the entire surface of the manuscript page and at times only parts of it, in other cases they are incorporated in the texts in harmony with the ensemble of the decoration.


Little is known about Toros Roslin’s life. He worked at the scriptorium of Hromkla in the Armenian Kingdom of Cilicia where the patriarchal see was transferred to in 1151. His patrons included Catholicos Constantine I, king Hethum I, his wife Isabella, their children and prince Levon, in particular. The colophons in Roslin’s manuscripts permit scholars to partially reconstruct the world in which he lived in.
In these colophons Roslin appears as a chronicler, who preserved facts and events of his time. In his earliest surviving manuscript the Zeytun Gospel of 1256, Roslin signed his name as "Toros surnamed Roslin".

Only Armenians of noble origin had a surname in the Middle Ages; however, the surname of Roslin does not figure among the noble Armenian families. Roslin may have been an offspring of one of the marriages common between Armenians and Franks (any person originating in Catholic western Europe) that were frequent among the nobility but occurred among the lower classes as well. Roslin also names his brother Anton and asks the readers to recall the names of his teachers in their prayers.

Professor Levon Chookaszian, head of the Chair of UNESCO and Chair of Armenian Art History at Yerevan State University, proposed a more detailed explanation of the appearance of this surname in the Armenian milieu. According to the professor, the surname Roslin originated from Henry Sinclair of the Clan Sinclair, baron of Roslin who accompanied Godfrey of Bouillon in the 1096 Crusade to Jerusalem. Chookaszian’s hypothesis is based on the assumption that like most prominent Crusaders of the time, Sinclair married an Armenian.


The approximate dates of Roslin's birth and death can be determined using the dates of his manuscripts. Based on the following it can be assumed that Roslin was at least 30 in 1260. At the time one could only achieve the level of mastery displayed in the Zeytun Gospel of 1256 no earlier than in their mid twenties. In the colophon of the Gospel of 1260, Roslin mentions that he has a son, indicating that he was likely a priest since a monk would have no children while a member of the laity would likely not have been an illuminated manuscript painter. By the time of the Gospel of 1265, Roslin already had his own apprentices. Roslin painted two portraits of prince Levon, the earliest of which was executed in 1250 (the prince was born in 1236) and the second in 1262 showing the prince with his bride Keran of Lampron. Roslin's name isn't seen on any manuscript dated after 1286 and he most likely died in the 1270s. None of Roslin's contemporaries or his pupils refer to him in their work and in the following centuries, his name is only mentioned once when the scribe Mikayel working in Sebastea in the late 17th century found in his monastery a gospel book illustrated in 1262 by the "famous scribe Roslin" which he later copied.