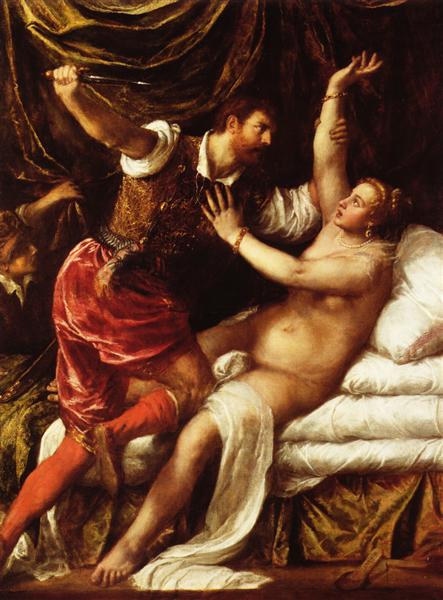 Tarquin and Lucretia is an oil painting by Titian completed in 1571, when the artist was in his eighties, for Philip II of Spain. It is signed, and considered to have been finished entirely by Titian himself. It is one of a series of great works from Titian's last years, but unlike some of these, is fully finished. It is now in the Fitzwilliam Museum in Cambridge, England.

The story from early Roman history (or legend) of the rape of Lucretia by Sextus Tarquinius (Tarquin), and her subsequent suicide, was a popular subject in Renaissance art. Tarquin raped Lucretia after threatening to kill her if she rejected his advances; this is the moment shown here. The next day she exposed him and committed suicide, prompting the Romans to revolt and overthrow Tarquin's father Tarquin the Proud, the last king of Rome, and establish the Roman Republic. This is traditionally dated to 509 BC. Violent subjects are characteristic of Titian's last years, mostly drawn from mythology or religion, but the directness of this composition stands out among them.

The refinement of the poses of the figures is reflected in other contemporary versions of the painting. By this late stage in his career, Titian often took many years over paintings, setting them aside for long periods, only returning to them later. This painting is fully finished, and had been in progress for several years. As one of the latest documented and fully finished paintings by Titian, it is evidence for the much-debated question of whether other late Titians were ever finished or not.

Most commonly, art depicted either the moment of the rape, or Lucretia is shown alone at the moment of her suicide. In this near life-size late version, which Titian said in a letter of 1568 (three years before it was completed) was "an invention involving greater labour and artifice than anything, perhaps, that I have produced for many years", the drama of the composition is heightened by small touches in pure white at the tip of the dagger and in Tarquin and Lucretia's eyes.

The head and hand entering from the left belong to a male slave; in Livy's telling Tarquin said he would kill both Lucretia and the slave and claimed to have caught them during the act of adultery. The violent attack is closer to Ovid's account of the story, and although this is the only painting of a historical subject from Titian's last years, his mythological subjects are also all covered by Ovid. Lucretia wears her jewellery to bed, and Tarquin's clothes are modern and rich. Titian's signature is on the slipper at lower right. The painting has been trimmed on all sides, but it is not known when or by how much.

The subject was one of a group showing women from legend or the Bible who were powerless, or only able to escape their situation through suicide, such as Susanna, Dido of Carthage and Verginia. These formed a counterpoint to, or sub-group of, the set of subjects known as the Power of Women, showing female violence against, or domination of, men. These were often depicted by the same artists, and especially popular in Northern Renaissance art. The story of Esther lay somewhere between these two extremes.