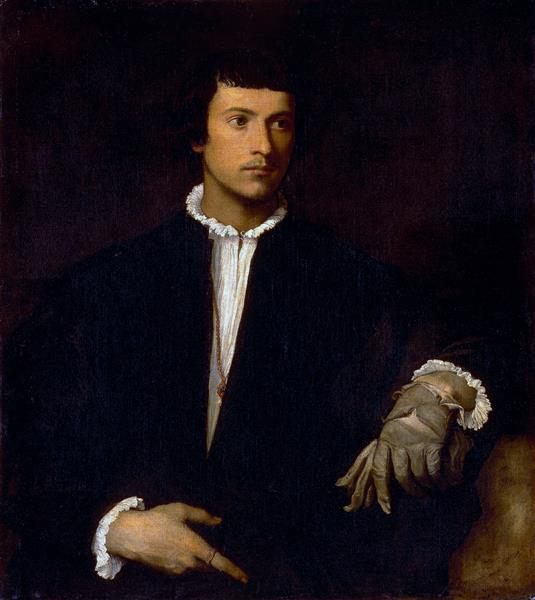 Man with a Glove

The Man with a Glove is an oil-on-canvas portrait by the Italian Renaissance artist Titian, c. 1520. It has been in the Musée du Louvre, Paris.

The work originates from the Gonzaga family's collection at Mantua. It was acquired by Charles I of England in 1627. Sometime after his beheading in 1649, the painting was auctioned and bought by the Cologne banker Eberhard Jabach . Eventually it came in the possession of Louis XIV of France, and was transferred from the Palace of Versailles to the Louvre in 1792.

The figure has not been identified with certainty. He could be Girolamo Adorno, mentioned in a 1527 letter from Pietro Aretino to Federico Gonzaga, or Giambattista Malatesta, an agent of the Gonzaga in Venice. According to another hypothesis, he could be Ferrante Gonzaga, who was sixteen years old in 1523.

The painting portrays a three-quarters view of a male figure set against a flat black background. He appears to be looking at an indefinite point to the left of the canvas, with his left arm laid on his knee. He could be pointing at his gloves, which were a fashion statement at the time - much like large muscles are today. He is dressed in a wide jacket and a white shirt, in the fashion of the period.

The man's gloved left hand holds a second leather glove; an accessory used by the most refined gentlemen of the time. His right hand is adorned with a golden ring, a symbol of richness, and a necklace decorated with a sapphire and a pearl. The use of a parapet in portraits was a common device of the young Titian.