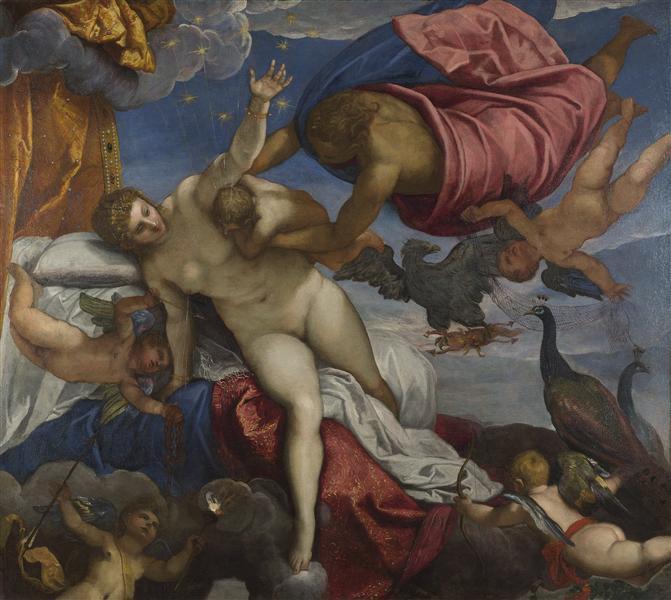 The Origin of the Milky Way

One of four paintings based on the myth of Hercules, Tintoretto's The Origin of the Milky Way, depicts the god Jupiter bringing his son Heracles, born of a mortal woman, to nurse from the breast of his wife, the goddess Juno. In a composition which anticipates the drama of Baroque painting, the artist creates a scene of flustered activity depicting the moment Juno awakens to discover Jupiter's deceit. According to myth, the infant Heracles would obtain immortality through breastfeeding from the goddess. However, as she awakes, Juno draws away in anger causing her milk to spray across the sky, thus forming the Milky Way indicated by an array of stars. From her other breast, milk falls toward Earth, resulting in the creation of beautiful lilies, believed to be part of the original composition (later trimmed down). Below the immortal couple, numerous cupids with bows drawn, symbolize the marital discord and its universal consequences.

The work provides visible proof of Tintoretto's skill as both a draughtsman and colorist. The foreshortening of Jupiter is reminiscent of Giotto's groundbreaking frescos in the Arena Chapel, the muscular Juno the influence of Michelangelo, but the rhythmic arrangement of figures is uniquely Tintoretto. The expert use of color in both the figures and attire relates to Tintoretto's childhood exposure to pigments in his father's workshop as a cloth dyer. The composition is built up from a carefully variegated palette which moves from intense blue to grey in the sky, and from white and gold through to orange, pink and scarlet in the draperies.

The Origin of the Milky Way is one of many mythological paintings Tintoretto created throughout his long career, though he is best remembered for his religious paintings. This particular series of paintings, commissioned from Rudolf II, the Holy Roman Emperor and King of Hungary, is an essential indication of the progressive artist's popularity beyond Italy. A mystery surrounds the original impetus for this painting. Some scholars believe it was first painted as a commission for the "grand guardian" of the Scuola Grande di San Marco, Tommaso Rangone, who had commissioned other notable works from the artist, including Finding the Body of Saint Mark (1562). After Rangone's death, the artist reconfigured this painting for the Emperor.

The Origin of the Milky Way is a painting by the Italian late Renaissance master Jacopo Tintoretto, in the National Gallery, London, formerly in the Orleans Collection. It is an oil painting on canvas, and dates from ca.1575–1580.

According to myth, the infant Heracles was brought to Hera by his half-sister Athena, who later played an important role as a goddess of protection. Hera nursed Heracles out of pity, but he suckled so strongly that he caused Hera pain, and she pushed him away. Her milk sprayed across the heavens and there formed the Milky Way. With divine milk, Heracles acquired supernatural powers.