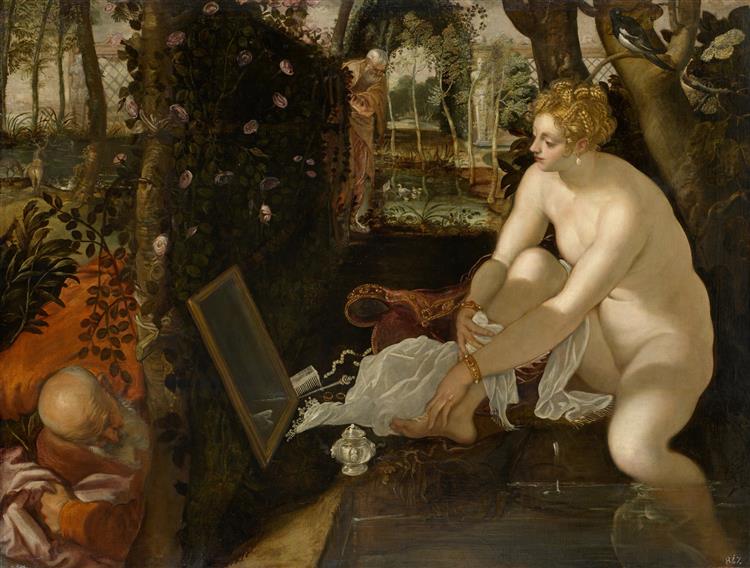 Susanna and the Elders

Susanna and the Elders is a painting by Venetian painter Jacopo Robusti (1518–1594). Robusti, also known as Tintoretto or Il Furioso, for the energy and "fury" with which he painted, depicted both sacred and profane subjects in a period known as the Venetian “golden century”.

Susanna and the Elders (c. 1555–56) depicts a scene from the biblical episode of Susanna, from the Book of Daniel.

The painting shows Susanna, a young married woman, sitting on the edge of a small pool, preparing to take a bath. She is watched by two elderly men, acquaintances of her husband, who desire her. The lustful elders are depicted in the painting hiding behind a rose trellis in her garden. They are watching and spying on her, trying to find an opportunity to catch her alone in the garden.

The story of Susanna and the elders was frequently depicted in art history. The painting is full of symbols. The objects beside the main figure included white pearls, silver jewelry, a silk shawl, and a silver jug. The painting is considered one of Tintoretto's "masterpieces".

According to the story, a young married Jewish woman named Susanna bathed in a pool in her garden every day. One day, two elderly men who were guests of Susanna's wealthy husband Joakim, lusted for Susanna, who was described as "The Beautiful Susanna". The elders – who were judges and respectable members of the community – came to an agreement that they would wait until Susanna was alone in the garden and then have their way with her. After Susanna sent away her maids to fetch fragrant oils and perfumes for her bath, the two men rushed forward, propositioning her to have sex with them. They threatened to denounce her if she rejected their advances.

Susanna rejected their proposal. The two prominent elders of the community then publicly denounced her, falsely accusing her of committing adultery with a young man. According to ancient Jewish law, adultery was punishable by death, and Susanna was condemned to death after everyone believed the two judges' story. Upset and crying, Susanna was taken away to be executed. She turned to God, calling upon him to prove her innocence. A young man named Daniel was standing in the crowd watching. While witnessing the procession Daniel heard the voice of an angel. The angel urged him to speak up and prevent the killing of an innocent woman who was being framed for doing something she had not done. (The young Daniel would later be known as the prophet Daniel.) The young man, surprised, felt obliged to halt the execution. He asked to be allowed to interrogate the two elders separately so that they could not speak to each other. Daniel then cross-examined the judges on how they had discovered Susanna, what the young man looked like, where they secretly met and so on. He kept receiving contradictory answers from the elders. When asked under which tree Susanna had committed adultery, the two elders gave very different answers and named different kinds of trees. The elderly judges were exposed for lying and for bearing false witness – a capital crime according to ancient Jewish law. Daniel proved Susanna was innocent, and she was freed while the elders were condemned.