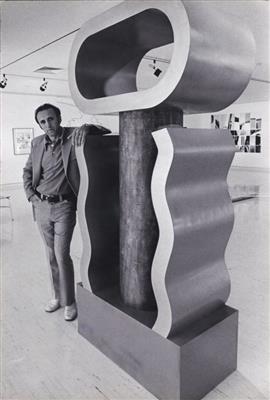 Thomas Nonn came to America as a young refugee from Hungary in 1957. Influenced by American action painting and obsessed with developing a language reflecting post-war central Europe, Nonn dedicated the last two decades to working with this somewhat melancholy color combination creating what he terms "material abstraction."

Rust plays a major role in these works and as Nonn’s mastery of this unusual painterly medium grows, the works increasingly appear to be the result of corrosion by the elements or the violence of man. As John Laughery suggested in his 1991 article for Art Journal, "Nonn's imaginative terrain has been blasted and burned like the earth itself, subjected to corrosive defilement: the copper he has applied is oxidizing into green, the rust sweeps over the canvas and wood like sediment left by retreating waters, and its soft tones of orange resemble a radioactive glow as much as the residue of industrial sources."

Nonn has made his own rust from iron powder that he suspends in an emulsion of industrial acrylic and then oxidizes with various strengths of acids. The textures are built up using rust in combination with sand, or marble dust and occasional but limited use of powdered earth pigments, oxidized copper or weatherworn wood. The resulting "matter paintings" record a unique history of the materials that transcend the mere decorative use of pigments to create art that is a contemplation of time and an exploration of nature.