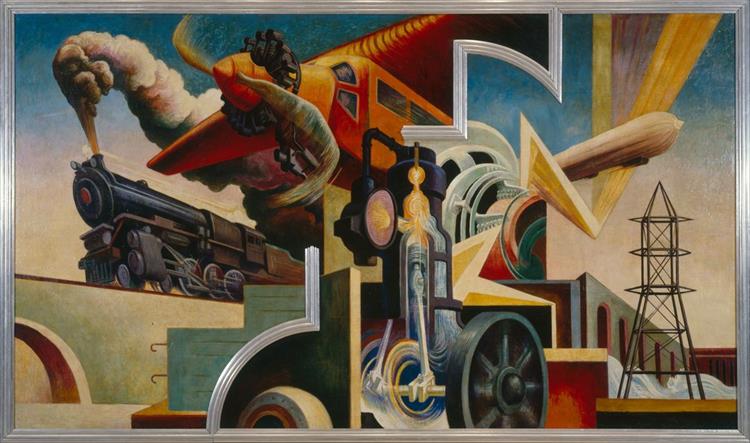 Offering a panorama of American life throughout the 1920s, America Today is a room-sized mural comprising ten canvas panels. Missouri native Thomas Hart Benton painted America Today to adorn a boardroom on the third floor of the New School for Social Research, a center of progressive thought and education in Greenwich Village. The mural was commissioned in 1930 by the New School's director Alvin Johnson. Benton finished it very early in 1931, when the school opened a new building designed by architect Joseph Urban. Although the artist received no fee for his work on commission, he was "paid" with free eggs, the yolks from which he created the egg tempera paint.

Eight of the America Today panels depict life in different regions of the United States: the South, the Midwest, the West, and New York. In the 1920s, Benton traveled throughout these areas of the country, creating a body of studies from life, mostly in pencil, on which he based many of the details in America Today. Benton painted Cotton Pickers, Georgia (1929) from the studies that he made during a trip through Arkansas, Mississippi, Alabama, and Georgia in the summer and fall of 1926. The artist returned to this same group of studies in conceiving and executing Deep South (1931), the first panel in America Today's geographical and chronological sweep.

The largest America Today panel, Instruments of Power, is filled with enormous machines that embody modern industrial might. The last and smallest panel, Outreaching Hands, shows only hands reaching for bread and other hands holding money, allusions to the economic despair and inequity caused by the Great Depression, which began in 1929. Despite references to the Depression, Benton's mural powerfully promotes the idea of "progress," as he perceived it, predicated on modern technology. Benton's mural reveals the artist's belief that the foundational technological and mechanical strength on which progress relied was, in turn, dependent on manual and industrial labor. Consequently, bodies of large, heroic workers fill many of the mural's panels. Workers and labor fascinated many artists and photographers throughout the 1920s, including Lewis Hine (1987.1100.119) and James Lesesne Wells (1999.529.173).


In contrast to these dramatic scenes of labor and struggle, Benton depicted in City Activities with Dance Hall (2012.478b) and City Activities with Subway (2012.478c) popular leisure-time activities during Prohibition (1920–33), particularly dancing (to jazz music) and drinking (illegal at the time). The bawdiness of Benton's scenes of urban life connects them to the work of his friend Reginald Marsh (32.81.2), who recalled modeling for the figure of the African American construction worker in the City Building (2012.478i) panel of America Today. Jackson Pollock, Benton's student at the Art Students League at the time, modeled for other workers, including the large figure in the panelSteel (2012.478h). In the 1940s, Pollock became a leader of the Abstract Expressionist movement.


Benton created America Today in a dynamic, restlessly figurative style that reflects his study of sixteenth-century European painting, especially the style known as Mannerism (1972.171). But the exaggerated, pantomimed gestures and expressions of the figures he painted also recall early twentieth-century film, among other popular sources. Also stagelike in character is Benton's depiction of architecture, particularly the dam in Instruments of Power (2012.478a), a facade that suggests his response to Italian painter Giorgio de Chirico (1996.403.10). Among the mural's most distinctive features are the aluminum-leaf wood moldings, which not only frame the entire work but also create inventive spatial breaks within each large composition. When America Today was installed in the New School, these moldings echoed Art Deco details in Urban's building design.


After appearing on the cover of Time magazine in 1934, Benton left New York and settled in Kansas City, Missouri the following year. Throughout the 1930s and into the 1940s, he became closely associated with a movement known as Regionalism, which included John Steuart Curry (42.154) and Grant Wood (50.117), artists who exalted rural America and tended to regard contemporary abstract art as un-American. During this period, Benton painted July Hay (43.159.1), a work that reflects his admiration for the sixteenth-century Netherlandish artist Pieter Bruegel (19.164).


After residing for more than fifty years in the boardroom of the New School, America Today proved difficult for the school to maintain in perpetuity. In 1982, the school announced the sale of the mural, with the condition that it would not be resold outside the United States or as individual panels. But the work was a great challenge to sell as a whole, increasing the likelihood that the panels would be dispersed.


America Today was acquired by AXA (then Equitable Life) in 1984, in support of efforts on the part of then-mayor Edward I. Koch and others to keep it intact and in New York City. Two years later, after extensive cleaning and restoration, America Today was unveiled to critical acclaim in AXA's new headquarters at 787 Seventh Avenue. When the company moved its corporate headquarters again in 1996, to 1290 Avenue of the Americas, America Today was put on display in the lobby. There it remained until January 2012, when the company was asked to remove it to make way for a renovation. The removal triggered AXA's decision to place the historic work in a museum collection, and in December 2012, AXA donated the mural to the Metropolitan Museum.