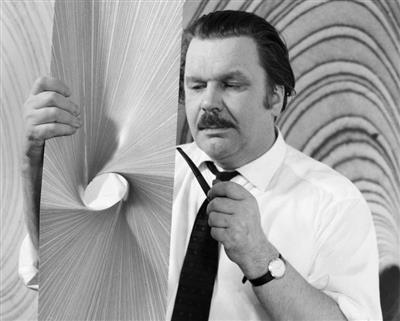 
Wirkkala was born in Hanko in 1915. He attended the Töölö co-educational school in Helsinki. His father, Ilmari Wirkkala, was a cemetery architect, and mother Selma (née Vanhatalo) a wood-carver. His sister Helena Korvenkontio and brother Tauno Wirkkala were also artists.


Wirkkala's work ranges from designs of plastic ketchup bottles and metalware to glass, ceramics and plywood in a range of styles. His success as a glass designer began in 1946 when he designed the Kantarelli vase for Iittala, and the mass-produced Tapio collection was launched in 1954. His range was immense, including glassware, stoneware, jewelry, and furniture for mass production, as well as individual sculptures in several media. He also designed the Finnish markka banknotes introduced in 1955. In the early 1950s, Wirkkala worked as the artistic director at the Helsinki Central School of Industrial Design.


Among his most famous work have been the designs for the Finlandia vodka bottle (1970-1999) and for Iittala's Ultima Thule set of kitchen glasses. Both glassware items feature a dripping icicle look, and in the case of the Iittala's glassware it is said to have taken thousands of hours to develop a glassblowing technique that would produce the effect.


Wirkkala did much of his initial design work using a traditional Finnish carving knife, the puukko. Wirkkala designed his own version of the knife, the Tapio Wirkkala Puukko, which was manufactured by Hackman Cutlery and marketed by Brookstone in the US in the early-1970s.


Wirkkala died in Helsinki on 19 May 1985 and was buried in the artists' area of the Hietaniemi Cemetery, next to his wife Rut Bryk.