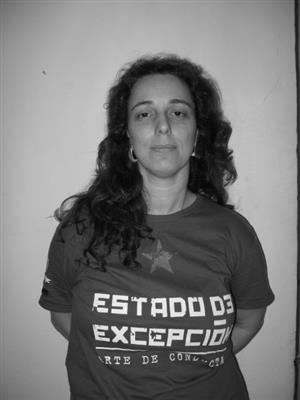 Tania Bruguera (born 1968) is a Cuban installation and performance artist. She lives and works between New York and Havana, and has participated in numerous international exhibitions. Her work is also in the permanent collections of many institutions, including the Museum of Modern Art and Bronx Museum of the Arts and the Museo Nacional de Bellas Artes de La Habana.


Bruguera's work pivots around issues of power and control, and several of her works interrogate and re-present events in Cuban history. As a result of her art actions and activism, Bruguera has been arrested and jailed several times.


She was born Tania Brugueras, the daughter of diplomat and politician Miguel Brugueras, but aged 18 changed her name to Bruguera, "her first act of political rebellion".


Bruguera studied at the Instituto Superior de Arte in Havana and then earned an M.F.A. in performance from the School of the Art Institute of Chicago. She is the founder and director of Catédra Arte de Conducta (behavior art school), the first performance studies program in Latin America, which is hosted by Instituto Superior de Arte in Havana.
From 2003 through 2010, she was an assistant professor at the Department of Visual Arts of the University of Chicago, United States and is an invited professor at the Università Iuav di Venezia in Venice, Italy.


Tania Bruguera's 1997 work The Burden of Guilt (El peso de la culpa) was the artist's take on a story that indigenous people in Cuba vowed to eat dirt and nothing else rather than be the captives of the Spanish conquistadors. Bruguera interpreted their act of eating dirt as "a weapon of resistance." In her performance, Bruguera stood, naked, with a lamb carcass hanging from her neck, creating both a physical and symbolic burden. For 45 minutes, she consumed soil mixed with water and salt, representing tears. As Edward Rubin described it, "the harrowing piece was first performed in Havana, where the audience was duly reminded that freedom, liberty, and self-determination are not abstract ideals, but achievements that deeply inscribe their meaning on our physical being."


In 1998–9 Tania created a behavior art piece titled "Desierro," which translates into ‘displacement’ in English. This piece of work resembles the power figure ‘Nikis Nkonde’ and is supposed to draw attention to the empty promises the Cuban government made to its people during the revolution. With this piece of art Tania calls upon the Cuban people to take an active stance and demands from the Cuban government to finally fulfill their promises.


In 2002 Tania Bruguera founded the Cátedra Arte de Conducta (Behavior Art School) in Havana to provide a space for the training of alternative art studies in contemporary Cuban society. The focus of the Cátedra was to educate Cubans on diverse styles of art, and to show how art could be used as a tool for the transformation of ideology.