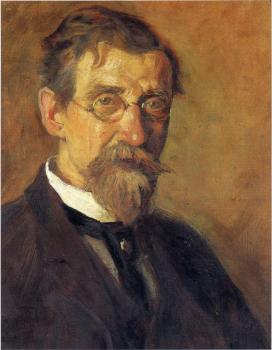 Theodore Clement Steele (September 11, 1847 – July 24, 1926) was an American Impressionist painter known for his Indiana landscapes. Steele was an innovator and leader in American Midwest painting and is one of the most famous of Indiana's Hoosier Group painters. In addition to painting, Steele contributed writings, public lectures, and hours of community service on art juries that selected entries for national and international exhibitions, most notably the Universal Exposition (1900) in Paris, France, and the Louisiana Purchase Exposition (1904) in Saint Louis, Missouri. He was also involved in organizing pioneering art associations, such as the Society of Western Artists.

Steele’s work is widely collected by museums and individuals. His paintings in public collections include those of the Haan Mansion Museum of Indiana Art, Indiana State Museum, Indianapolis Museum of Art, the Los Angeles County Museum of Art, and the Indiana University Art Museum in Bloomington, Indiana, among others.

Steele’s contributions were recognized with honorary degrees from Wabash College in 1900 and Indiana University in 1916. In addition, Steele was elected to an associate membership in New York’s National Academy of Design in 1913.

Steele was born near Gosport in Owen County, Indiana, on September 11, 1847, the eldest child of Samuel Hamilton and Harriett Newell Evans Steele. Steele’s father was a saddle maker and farmer. In 1852 the family moved to Waveland in Montgomery County, Indiana, where Steele developed an interest in art and learned to draw. The T.C. Steele Boyhood Home at Waveland was listed on the National Register of Historic Places in 2003.

Steele began formal art training as a boy at the Waveland Collegiate Institute (Waveland Academy). At sixteen, he continued his art training at Asbury College (now DePauw University) in Greencastle, Indiana. Steele also studied briefly in Chicago, Illinois, and Cincinnati, Ohio, before returning to Indiana to paint portraits on commission.

In 1870 Steele married Mary Elizabeth (Libby) Lakin. The couple moved to Battle Creek, Michigan, where a son Rembrandt, or Brandt, was born in 1870; a daughter Margaret (Daisy) was born in 1872. Soon after Daisy’s birth the family moved to Indianapolis, Indiana. Although it was difficult, Steele managed to support his family by painting commissioned portraits and commercial signs. Another son, Shirley, was born in Indianapolis in 1879. Libby, who suffered from chronic rheumatoid arthritis and tuberculosis, died in 1899. Daisy Steele married Gustave Neubacher of Indianapolis in 1905.

Steele married Selma Laura Neubacher, an Indianapolis art educator and Gustave's younger sister, on August 9, 1907, in Indianapolis. The newlyweds immediately moved into a newly constructed, four-room home, which they named the House of the Singing Winds, on more than 171 acres (69 hectares) of hilltop land in Brown County, Indiana. In 1910 Steele purchased the adjoining 40 acre tract as an addition to his original 171-acre tract, bringing the total acreage to 211 acres (85 hectares). T. C. and Selma, who was twenty-five years younger than Steele, had no children together. She died on August 28, 1945.