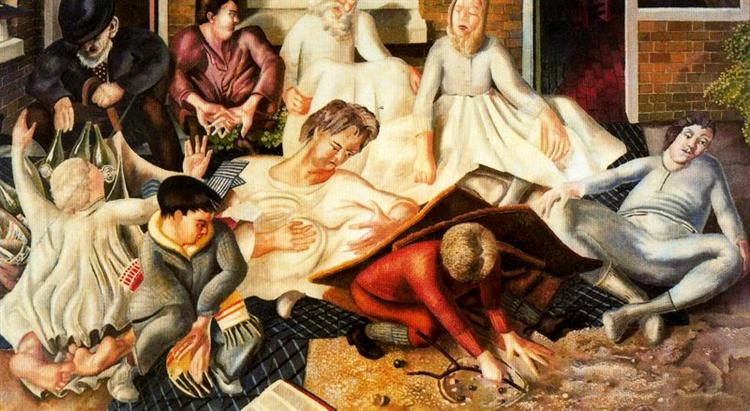 The painting Villagers and Saints (1933) by Stanley Spencer was painted shortly after the artist returned to his place of birth, the historic village of Cookham. Spencer was inspired by Cookham to which he often referred as “a village in Heaven”. Paintings such as Villagers and Saints (1933) express the artist’s experience in Cookham: “Quite suddenly I became aware that everything was full of special meaning, and this made everything holy... I observed the sacred quality in the most unexpected quarters.” Villagers and Saints, along with Sarah Tubb and the Heavenly Visitors (1933) and Separating Fighting Swans (1933), belongs to the Pentecost scheme that Spencer started in 1933. The group of paintings depicts angels and saints visiting the village of Cookham as they take part in various activities.

In Villagers and Saints, Spencer creates a scene that blends heaven and earth – a setting in which the villagers and the saints cohabitate. The scene is not only a divine event in a village setting. In his vision, Spencer goes a step further, blurring the separation between the heavenly and the earthly. The composition of the painting flows from left to right across two lines that coincide with the final figure of the man in the grey underwear. The male figure can be described as ‘half-way to a saint’, a figure in a transitional state of ‘becoming’. This is conveyed by his clothing: unlike the other villagers, he is stripped to his outer garments but is still not wearing the white robes of the saints. His facial expression reflects his transitional state between villager and saint. He appears to be in a trance, between drunkenness and meditation.

Painting such as Villagers and Saints articulate Spencer’s unique understanding of Christianity. In the work, Spencer combines the religious and the ordinary – the villagers are connecting to the saintly and spiritual world, while the saints exist in the physical world. By blurring the lines between the heavenly and the earthly, Spencer elevates the ordinary activities that make up daily life in Cookham. For instance, the mundane scene of two boys in grey and red marbles gains new meaning. In the divine environment, the boys absorbed in the game can be understood as a reference to heaven on earth. As is the case with most of his religious paintings, the scene in Villagers and Saints is set outdoors, in a public space. The public setting allows Spencer to include figures such as the rag and bone man (a scavenger that collects unwanted items to sell to merchants), who is rummaging through the sack on the top left. Spencer added an open book at the bottom of the painting. Even though the text is illegible, the layout of the page suggests that it is a Bible.

Elements in the painting show the influence of Flemish art on Spencer. The female saint on the left is reminiscent of the figures in nativity paintings of 15th-century artists Rogier van der Weyden and Hugo van der Goes. Additionally, the color scheme of the painting is similar to Christ and the Woman Taken in Adultery (ca. 1600) by Pieter Brueghel the Younger.