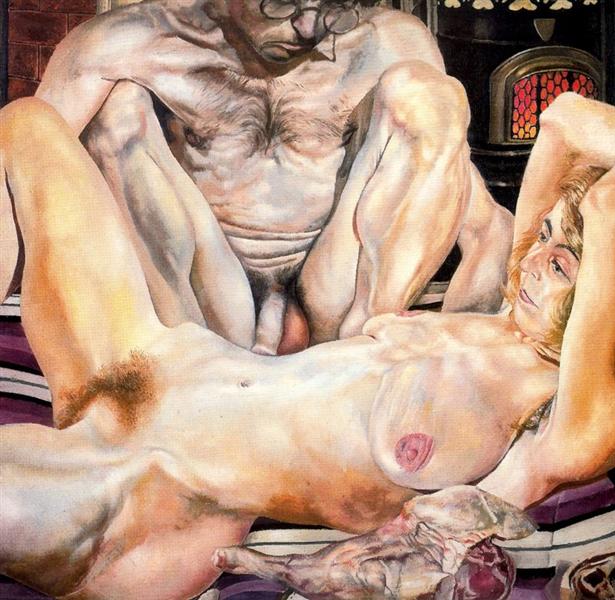 Double Nude Portrait: The Artist and his Second Wife (The leg of mutton nude)

Double Nude Portrait: The Artist and his Second Wife (1937) shows the painter with his second wife and model, Patricia Preece. Sometimes the painting is called Leg of Mutton Nude because Preece lies on her back next to a raw leg of lamb. The couple is seen naked, their bodies are depicted in a realist manner. Spencer concentrated on the colors and textures of human skin which are contrasted with the flesh tones of the leg of mutton.

The two figures are seen up close in a condense space, but despite their physical proximity, there is a sense of detachment and discomfort between the pair. Spencer painted the portrait at his house in Cookham, where he lived from 1932 to 1938. In 1934, Spencer became involved with Preece, and he painted Double Nude Portrait: The Artist and his Second Wife the same year he married her. However, by then their relationship was already troubled and strained: Patricia returned to her long-term partner, the artist Dorothy Hepworth, and the marriage with Spencer was never consummated. The sexually charged portrait may reflect some of Spencer’s frustrations with the marriage to Preece.
According to Spencer’s papers, the painting is one of seven nudes or semi-nudes that the artist painted from life or life drawings. For Spencer, these were significant works, in part because they greatly differed from his figure paintings of imaginative and visionary scenes like The Last Supper (1920) and The Resurrection, Cookham (1924-1927). In his writings, he explained: “‘I wish my shows could include the nudes (oil) that I have done. I think having them interspersed in a show would convey the range of my work. They are quite different. I wish there were more of them, but I have never had pro models, not liking the idea. I believe I could do some good painting if I did.” Despite this, it appears that these seven nude paintings are the only nudes the artist painted from life.
Still, for Spencer, these paintings demonstrated his artistic range and emphasized a new aspect of his work. The Double Nude Portrait: The Artist and his Second Wife is the largest and most complex out of the series of nude paintings painted from life. In his writings, he referred to the painting: “When I put it alongside any of my other work it shows how needed it is to give to my work the variety that is so refreshing. The big double nude is rather a remarkable thing. There is in it male, female, and animal flesh. The remarkable thing is that to me it is absorbing and restful to look at. There is none of my usual imagination in this thing: it is direct from nature and my imagination never works faced by objects or landscapes. But something is satisfying in looking at it. It was done with zest and my direct painting capacity I had.”

During World War I, Spencer began to conceptualize a unique space for the exhibition of his paintings. Spencer called this building ‘Church-house’, a half secular, half religious space that represented peace and love. Spencer wrote about the nude paintings in his plan for the ‘Church-house’: “There would be a room of nudes from life… The room of nudes would show how much they balance a need in the whole cosmical conception… I wanted the in the nude section to show the analogy between the Church and the prescribed nature of worship, and human love”. The painting was acquired by the Tate Gallery, London in 1974.