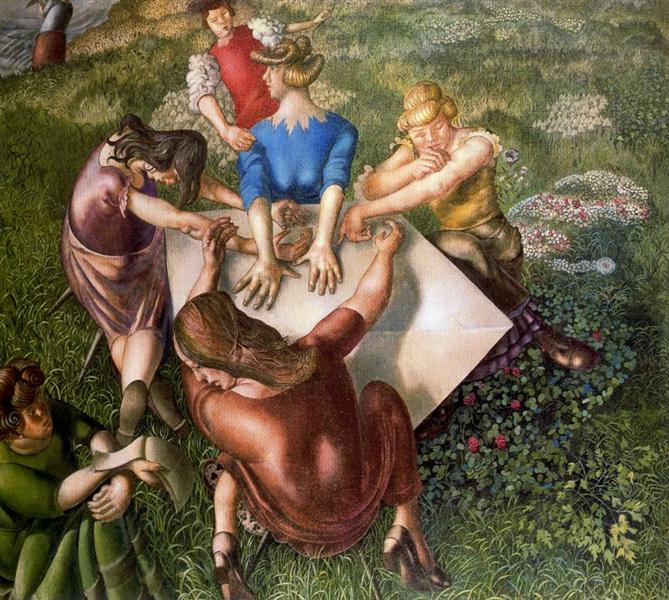 Stanley Spencer was born in the historic village of Cookham, which was one of the chief inspirations for his art. For Spencer, Cookham was “a village in Heaven”, and it was the setting of many of his religious paintings. One of these was the series Christ Preaching at Cookham Regatta that Spencer began painting in 1952. The artist based the series on his memories of the Regatta in the Edwardian era (1901-1910).

The idea for the series traces back to a drawing Spencer made in the late 1920s. It portrayed Christ preaching from the horse ferry barge in the Thames surrounded by punt boats filled with elegant visitors heading to the regatta. Spencer was not satisfied with the drawing, and even though he briefly returned to the idea in 1938, these new studies were also not realized until 1949. He began painting the series by selecting several scenes from 68 red conté sketches of the regatta.

The series contains a large central painting (207 cm x 534 cm) Christ Preaching at Cookham Regatta (1959), and six smaller canvases of various formats and sizes. Only the central painting directly relates to the religious subject, while the accompanying paintings described the activities that occur on the river and the riverbank. Spencer died before he was able to complete the central work of the series, thus his vision of the series was never fully realized.

One of the accompanying painting, Christ Preaching at Cookham Regatta: Punts by the River (1958), depicts a group of girls in summer dresses talking in the punting boat. Most of the accompanying paintings show Cookham’s high society dressed in their finest garments, enjoying the festivities of the Regatta. Spencer remembered how the Regatta emphasized class distinction, between those who could afford a punt and those who could only watch from the sidelines. The local girls in Punts by the River stand in contrast to the elegant village elite, they are dressed in simple clothes celebrating a rare break from their daily routine. The figures were probably based on local adolescents Spencer knew from the village. At the top of the composition, a nude young man seems to be trying to join the conversation, which adds an erotic element to the scene. His contorted pose is reminiscent of a saint in a Renaissance altarpiece, which brings a mystical component to the painting. The young man strongly resembles the artist, which is possibly a sign of Spencer’s nostalgia for his adolescent days in Cookham.

The series was conceived for Spencer’s ambitious project Church-house, a unique exhibition space that would house his Cookham paintings. The Church-house was a half-secular half-religious building devoted to love and loss. The design of the building was meant to mirror the topography of Cookham, the High Street would be the nave and the two side aisles would represent the School Lane and the River. Spencer intended the Christ Preaching at Cookham Regatta series for the River aisle. Even though Spencer worked intensely on Church-house in his final years, he was not able to realize the project before his death in 1959.