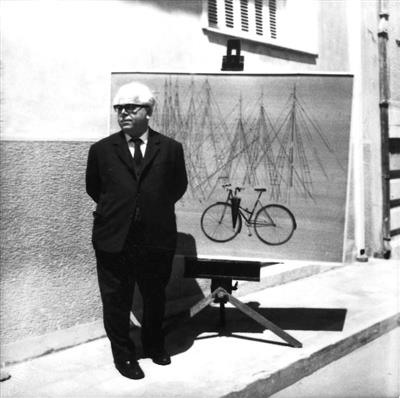 Spyros Vassiliou (Greek: Σπύρος Βασιλείου; 1903- 03.22.1985) was a Greek painter, printmaker, illustrator, and stage designer. He became widely recognized for his work starting in the 1930s, when he received the Benaki Prize from the Athens Academy. The recipient of a Guggenheim Prize for Greece (in 1960), Spyros Vassiliou's works have been exhibited in galleries throughout Europe, in the United States, and Canada.


The townsmen of Galaxidi, where Vassiliou was born, collected money to send him to Athens in 1921, to study at the Athens School of Fine Arts under teachers Alexandros Kaloudis and Nikolaos Lytras. In 1929, Vassiliou held his first individual exhibition, and in 1930 he was awarded the Benaki Prize for his design of Saint Dionysios Church in Kolonaki, Athens. During this time he was also a founding member of the art groups ”Techni" and "Stathmi". He represented Greece at the Venice Biennale in 1934 and 1964, exhibited in Alexandria in 1957, and at the São Paulo Art Biennial in 1959. In 1955 he designed and painted the interior of Saint Konstantinos Orthodox church of Detroit. In 1960 his autobiographical work, Lights & Shadows, was exhibited in the Guggenheim Museum. In 1975 and 1983 his work was presented in a retrospective exhibition in the National Art Gallery and Alexandros Soutzos Museum.


Spyros Vassiliou became recognized as a painter of the transformation of the modern urban environment, depicting with an unwavering eye the sprawl of urban development that surrounded his home in Athens, under the walls of the Parthenon. His artistic identity combined monochrome backgrounds and the unorthodox positioning of objects. He paid homage to the Byzantine icon by floating symbols of everyday Greek life on washes of gold or sea-blue color, very much like the religious symbols that float on gold in religious art. With oils and watercolours he painted natural and urban space, portraits, still-life, and scenes of daily living, combining selective elements of cubism and impressionism. A member of an important community of Greek artists in the mid-20th century, Vassiliou was known as one of the first Greek pop-art painters.


For many years Vassiliou taught theatre. As early as 1927 he designed sets and costumes for the stage. He also worked in film. Well known projects include Michalis Kakoyiannis' 1962 adaptation of Euripedes, and Elektra, starring Irene Papas and close friend Manos Katrakis.


During the years of the German occupation of Greece (1941-1945), when painting supplies were scarce, Vassiliou turned to engraving and woodcuts. Works such as The Burial of Palamas and The Mourning of the Kalavrytans (1943) became famous in Greece as symbols of freedom. His activity during those years also included the illustration and underground publication of three manuscript volumes as well as woodcut prints for magazines.


Over the years, dozens of Vassiliou's illustrations and paintings were printed on covers of books and magazines including The Athenian (magazine) and children's magazine To Rodi, where he also critiqued children's drawings.


The Greek National Tourism Organization used ones of Vassiliou illustrations, the "Island of Poros", as a promotional poster for Greece in 1948.