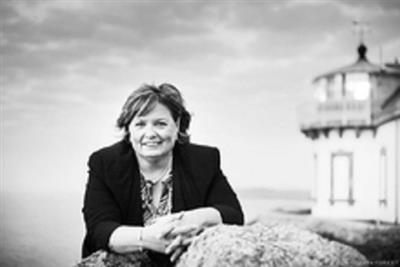 The fourth daughter of King Mihai I of Romania and Queen Anne (née of Bourbon-Parma), HRH The Princess Sophie of Romania is an internationally known artist and photographer. She continues the tradition of her author and artist great-grandmother, Queen Marie of Romania, and she inherited her love of photography from her father.

She recalls that he took a camera wherever he went on his travels, and that he had developed his own, beautiful, black and white photographs of the Carpathian Mountains, shot before the Communist takeover in 1947. From a very young age, Princess Sophie had her own and she vowed to become as sensitive a photographer as he.

Princess Sophie’s first exhibitions were in the late 1970s, in St. Tropez and Monte Carlo.

After two and a half years’ study of Fine Arts and Photography in the United States, at the University of North Carolina at Asheville, she spent months in total isolation in Maine’s Acadia National Park, preparing a series of paintings of the rocky North Atlantic seacoast in acrylic on wood. These she exhibited on both American coasts, including Nantucket, Palm Beach, and Los Angeles. She also exhibited in Nassau, Bahamas.

After extensive travel in the United States, she again picked up the thread of her studies at the Corcoran College of Art and Design in Washington, DC. She intended to complete her Bachelor of Arts in Graphic Design and earn a Master’s in Photography.

However, the fall of Communism in Romania in December 1989, changed her life dramatically. She joined her father to support his and her family’s work in assisting the Romanian people in their struggle to recover their identity after decades of tyranny.

As vice president of the Princess Margareta of Romania Foundation, she traveled throughout Romania for the Foundation’s philanthropic work, distributing relief at first, then identifying potential projects. Princess Sophie then traveled to the four corners of the United States and to Canada to raise funds.

The proceeds of Princess Sophie’s first book, a collection of children&#39;s stories published in Bucharest in 1995, benefited the Foundation’s work for sick and disadvantaged children.

She picked up her camera again in 2000. Her first trip to Brittany, France, amazed her with its photographic possibilities. This area, on the European side of the North Atlantic, became her photographic playground. By 2007, Princess Sophie and her daughter were living there permanently.

The guidance of mentor Terence O’Donnell, a British artist and retired professional photographer specialized in war reportage settled in France, encouraged her to make photography her profession. She has since won recognition internationally as a photographic artist.

Princess Sophie uses her camera as a way to express herself, as a means to translate and convey the emotions she feels from any given scene. How various slants of light interact with the ocean, the coastal cliffs and rocks, the built environment of centuries- old churches, stone buildings, lighthouses — these particularly move the artist in her, as do the lush, ancient forests in which Brittany abounds.

Her fervent defense of the natural and man-made environment has led her to become Honorary President, Ambassador, and an active member of “Phare en Cap,” which promotes and safeguards the Breton maritime heritage of the Cap Sizun, denominated a “Grand Site de France”, and the Pointe Du Millier in particular.

Princess Sophie, whose historic background is extensive, is also a member of the Center for the History of Brittany (Centre d’Histoire de Bretagne – Kreizenn Istor Breizh), which promotes the history of Brittany widely both within Brittany and beyond. She is currently contributing to its projected, searchable database of historical images of Brittany from the stone age through today.

Princess Sophie of Romania (Romanian: Sofia; born 29 October 1957) is the fourth daughter of King Michael I of Romania and Queen Anne.


Princess Sophie was born at Tatoi Palace in Decelea, Kingdom of Greece. She was baptised in the Romanian Orthodox Church; her godmother and namesake was her father's first cousin Princess Sophie of Greece and Denmark, later Queen of Spain. She was educated in Switzerland where her family lived and in the United Kingdom.


Princess Sophie has exhibited her photography for a number of years, and has held exhibitions in France and in Romania. She took part in the Royal Bridges Art Exhibition in Dubai in 2016.


Sophie's involvement in Romania changed significantly after the 1989 Romanian Revolution. She accompanied her older sister Margareta as the first members of the Royal Family to set foot on Romanian soil following the revolution in January 1990. The visit received widespread press coverage and was the beginning of the return of King Michael's family to public life in Romania. During the initial visit, Sophie was horrified at some of the appalling living conditions she encountered and became an active Vice-President of the newly formed Princess Margareta of Romania Foundation, involved in both fund raising and the distribution of aid. Sophie and Margareta both moved to their parents's house in Switzerland to help co-ordinate the huge increase in activity in King Michael's office in the months that followed the Revolution. In 1995 Sophie published a collection of children's stories to benefit the Foundation.


After some years of being less frequently in Romania, Sophie has been present in Romania more often in recent years attending the 25th Anniversary of the return of the Royal Family in 2015, the 150th Anniversary of the Royal House in 2016 and the annual reception for the Diplomatic Corps given by Crown Princess Margareta on 29 November 2017. The same day Princess Sophie was invested with the Grand Cross of the Order of the Crown in a ceremony conducted by Crown Princess Margareta at the Elisabeta Palace.


She was present at the Lying in State of King Michael I in December 2017 and Queen Anne in August 2016 (held firstly at Peles Castle, and then in the Throne Room of the Royal Palace in both cases), at their public funerals in Bucharest and at their burials in Curtea de Argeș.


Princess Sophie has a daughter from her former marriage to Alain Michel Léonce Biarneix de Laufenborg (b. Nancy, France on 10 July 1957). They married on 29 August 1998 in a civil ceremony in Neuilly-sur-Seine, France. Later they divorced in 2002.