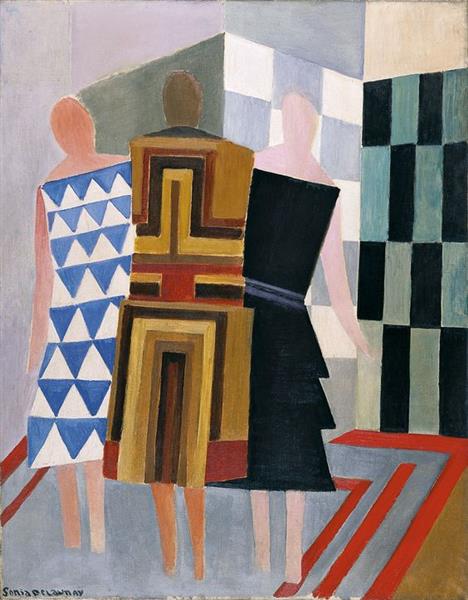 This painting was originally called Trois femmes, forms, couleurs (Three Women, Forms, Colours), as stated on the label affixed to the back of the painting for the exhibition held at the Grand Palais in Paris in 1926. However, the painter changed this title to Simultaneous Dresses in her personal inventory.

Sonia Delaunay had been interested in clothing from a very early age, but it was not until 1917, when the revolution cut off her money supply from Russia, that she devoted herself to fashion design as a means of subsistence. After the Delaunays settled in Madrid, Sonia began designing costumes for Diaghilev’s Ballets Russes, which had also taken refuge in the Spanish capital, and to work for the fashion industry. In 1919, encouraged by a string of successes in this field, Sonia opened her first shop in Madrid — Casa Sonia — setting a precedent for the Boutique Simultané established in Paris in 1924.

Sonia’s first Simultaneous dress, created in 1913 to dance the tango at the Bal Bullier, was an original piece defined by Apollinaire as “a living painting” and “a sculpture of living forms.” Sonia designed her dresses by joining together small pieces of fabrics in different forms and textures; she combined her simultaneous colors with prints and paired luxury fabrics with coarser textiles, shortened hemlines and sleeves, and lightened shapes, thereby achieving a totally modern image.

Simultaneous Dresses from the Thyssen-Bornemisza collection belongs to a group of paintings in which the painter transfers to canvas the result of her experiments on paper as a fashion designer. Of the three dresses featured in this work, that worn by the central figure reproduces Sonia’s design for the film actress Gloria Swanson. The painting was created for the exhibition held at the Grand Palais in Paris, in 1926.