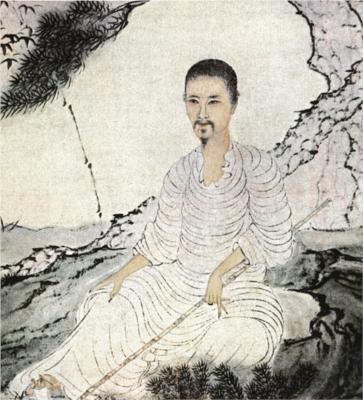 Born in Quanzhou County in Guangxi province, Shitao was a member of the royal house descended from the elder brother of Zhu Yuanzhang. He narrowly avoided catastrophe in 1644 when the Ming Dynasty fell to invading Manchus and civil rebellion. Having escaped by chance from the fate to which his lineage would have assigned him, He assumed the name Yuanji Shitao no later than 1651 when he became a Buddhist monk.

He moved from Wuchang, where he began his religious instruction, to Anhui in the 1660s. Throughout the 1680s he lived in Nanjing and Yangzhou, and in 1690 he moved to Beijing to find patronage for his promotion within the monastic system. Frustrated by his failure to find a patron, Shitao converted to Daoism in 1693 and returned to Yangzhou where he remained until his death in 1707. In his late years, he is said to have greeted Kangxi Emperor visiting Yangzhou. Geyuan Garden grows Chinese bamboo variations that Shitao himself loved.

Shitao used over two dozen courtesy names during his life. Both like and unlike Bada Shanren, his feelings for his family history can be deeply felt from these.

As a buddhist convert, he was also known with the monastic name Yuan Ji (原濟)

Da Dizi was taken when Shitao renounced his Buddhism and turned to Daoism. It was also the name he used for his home in Yangzhou (Da Di Hall - 大滌堂).

Shitao is one of the most famous individualist painters of the early Qing years. The art he created was revolutionary in its transgressions of the rigidly codified techniques and styles that dictated what was considered beautiful. Imitation was valued over innovation, and although Shitao was clearly influenced by his predecessors (namely Ni Zan and Li Yong), his art breaks with theirs in several new and fascinating ways.

His formal innovations in depiction include drawing attention to the act of painting itself through his use of washes and bold, impressionistic brushstrokes, as well as an interest in subjective perspective and the use of negative or white space to suggest distance. Shi Tao's stylistic innovations are difficult to place in the context of the period. In a colophon dated 1686, Shitao wrote: "In painting, there are the Southern and the Northern schools, and in calligraphy, the methods of the Two Wangs (Wang Xizhi and his son Wang Xianzhi). Zhang Rong (443–497) once remarked, 'I regret not that I do not share the Two Wangs' methods, but that the Two Wangs did not share my methods.' If someone asks whether I [Shitao] follow the Southern or the Northern School, or whether either school follows me, I hold my belly laughing and reply, 'I always use my own method!'"