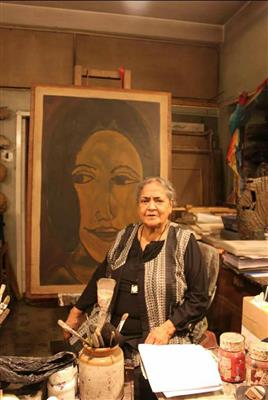 
Shanu Lahiri (23 January 1928 – 1 February 2013) was a painter and art educator who belonged to one of the most prominent and culturally elevated families of Kolkata and a first-generation modernist who emerged post independence. She was one of Kolkata's most prominent public artists, often dubbed as "the city's First Lady of Public Art", undertaking extensive graffiti art drives across Kolkata to beautify the city and hide aggressive political sloganeering. Her paintings are housed in the Salar Jung Museum and the National Gallery of Modern Art


Shanu Lahiri was born on 23 January 1928 in Calcutta (now Kolkata) into one of Calcutta's most prominent artistic families-the Mazumdar family of seven siblings. Her mother, Renukamoyee Mazumdar, though unlettered, practised calligraphy at night. Lahiri had two older brothers, the noted litterateur and writer Kamal Kumar Majumdar and artist Nirode Mazumdar, one of the Greats of 20th century modernism, now largely forgotten and a founder member of The Calcutta Group. Growing up in this atmosphere of intense creativity she was equally influenced by her mother's culinary skills. She recalls in her memoirs-


"Not far away Niru-da is busy doing a wash of a big painting he has just finished. As for dada, the eldest of our siblings, he is forever scribbling away. That was how it always was throughout my childhood...all of it flowing into my veins, forming my very being. I did not realise then what it was that I was witnessing and absorbing as a matter of course."


As a student of the Government College of Art & Craft, Calcutta, she belonged to one of the earliest batches of female students who entered on the year of the nation's Independence and studied under Atul Bose & Ramendranath Chakraborty during her first two years. In her third year she studied under professor Basanta Ganguly, a valiant representative of conservative, if not academic traditions in art. At the art college she was drilled into being a technically adept draftsman, following the curriculum set by the British colonial system, however was at loggerheads with Basanta Ganguly on many occasions as she would recall years later in a candid interview. She graduated in 1951 and was the first student of the college to receive the AIFACS President's gold medal for her outstanding contributions in art while being an undergraduate. In 1955 she daringly took on the challenge to hold a solo exhibition at the AIFACS gallery. It was here, where she found herself exhibiting her works opposite two senior masters from Bombay, Gaitonde and Gade .


In 1956 she received a French Government Scholarship, which enabled her to study in Paris for a period of two years between 1956 and 1958. She studied at the École du Louvre where she learnt art history and art-appreciation and at the Académie Julian she learnt painting . This international exposure enabled her to break free from the strictures of Academic training and the lingering stereotype of 'Indian-style' painting that prevailed amongst most Indian artists.


Shanu Lahiri entered her artistic career in the heady years of India's Independence. Breaking away from her initial academic training was crucial to making the new modernist art which infused the influence and inspirations of international art movements. It was fully in keeping with the period's main artistic trends that she moved from her training and in Paris she actively embraced the legacy of the French High Modern.