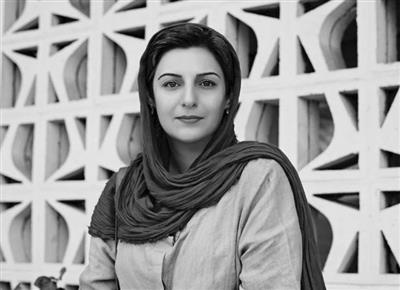 Shadi Ghadirian (born 1974 in Tehran, Iran) is a contemporary photographer living and working in Tehran. Her work is influenced by her experiences as a Muslim woman living in contemporary Iran, but her work also relates to the lives of women throughout the world. Through her work, she critically comments on the pushes and pulls between tradition and modernity for women living in Iran, as well as other contradictions that exist in everyday life. She explores the topics of censorship, religion, modernity, and the status of women. Ghadirian gained international recognition through the series Qajar and Like Every Day in 1998 and 2001, respectively, and is now represented by Aeroplastics Gallery in Brussels, Kashya Hildebrand in London and Re-title.com, an online database for up-and-coming contemporary artists.


In addition to focusing on individual projects, Ghadirian currently works at the Museum of Photography in Tehran.


Shadi Ghadirian has produced nine photographic series to date, titled Miss Butterfly, Nil, Nil, Be Colourful, Like Every Day, Qajar, Ctrl+Alt+Delete, My Press Photo, Out of Focus, and West by East. These series attempt to work through and reveal the issues that women face living in contemporary Iran while also bringing to light the complexities of negative stereotypes that these same women face coming from abroad.


In Ghadirian’s first series, Qajar (1998), the artist arranged portraits of women, mainly her friends and family, using backdrops and dress reminiscent of the Qajar era (1785-1925), but added contemporary Western props such as a boom box, a Pepsi can, a phone or a vacuum. Portraits taken in the Qajar period were traditionally captured in a formal setting, and the subject often posed with prized possessions and objects that pointed to elite status. This juxtaposition of the traditional and the contemporaneous served as a starting off point for later series that further developed around the theme of contradiction in everyday life in contemporary Iran.


Ghadirian examines the ever-shifting standards of female appearance in Iran with Be Colorful (2002). Women are photographed garbed in various brightly colored veils behind paint-speckled glass.


West by East (2004) was a part of larger exhibit by the same name where the artists expressed their views of the West. Ghadirian takes self-portraits of her dressed in Western clothing then uses black paint to censor all skin that would be covered by modest dress, i.e. all but the hands and face. This imitates how Western women were shown in imported magazines due to Iranian censorship during Ghadirian's childhood.


In Ctrl+Alt+Del (2006), Ghadirian explores the extent in which technology is accepted by using application icons to replace or extend the body. The inspiration of the work came from advice she was given. She recounts the story, saying, “When I started the series, I was pregnant. Everybody told me I shouldn’t use the cell phone or computer because it would be dangerous for both me and the baby.”