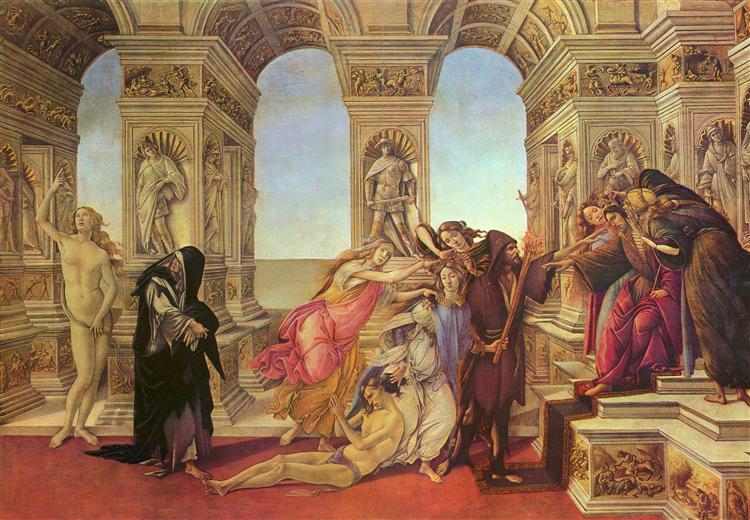 The Calumny of Apelles is a tempera panel painting by the Italian Renaissance painter Sandro Botticelli. Based on the description of an ancient lost painting by Apelles, the work was completed in about 1494–95, and is now in the Uffizi, Florence.

The content of Apelles' painting, as described by Lucian, became popular in Renaissance Italy, and Botticelli was neither the first nor last Italian Renaissance artist to depict it. Leon Battista Alberti had praised it and recommended it as a subject for artists to recreate in his highly influential De pictura of 1435, and there were four translations of Lucian's Greek into Latin or Italian during the 15th century.

A number of Botticelli's secular works show an interest in recreating some of the lost glories of Ancient Greek painting, which are recorded in classical literature, especially the ekphrasis, a popular literary genre consisting of the description of a painting, which had an obvious utility before reproductions were widespread. His Mars and Venus, painted some ten years earlier, is generally agreed to borrow part of its composition, the infant satyrs playing with Mars' armour, from another ekphrasis by Lucian, but no other Botticelli painting is clearly an attempt to recreate an ancient composition almost in full.

The painting is an allegory with nine figures (as well as many painted statues) but at 62 x 91 cm is far smaller than his large mythological paintings, but larger than the usual size of his spalliere pieces intended to be fitted into panelling or furniture. However, it is comparable in size to his Mystical Nativity, and like that may have been painted for his own use. It was completed around 1494 or 1495, and is probably the last secular painting of his to survive. It is often speculated that Botticelli had a specific slandered individual in mind, perhaps himself, or Savonarola. In 1502, some years after the probable date of the painting, an anonymous denunciation to the authorities accused Botticelli of sodomy.

The figures are either personifications of vices or virtues, or in the case of the king and victim, of the roles of the powerful and the powerless. From left to right, they represent (with alternative names): Truth, nude and pointing upwards to Heaven; Repentance in black; Perfidy (Conspiracy) in red and yellow, over the innocent half-naked victim on the floor, who is being pulled forward by the hair by Calumny (Slander), in white and blue and holding a flaming torch. Fraud, behind, arranges Calumny's hair. Rancour (Envy), a bearded and hooded man in black, holds his hand towards the king's eyes to obscure their view. On the throne, the king has the donkey's ears of King Midas, and Ignorance on his far side and Suspicion on the near side grasp these as they speak into them. The king extends his hand towards Calumny, but his eyes look down so that he cannot see the scene.

These identifications are clear from Lucian's description of a painting by Apelles, a Greek painter of the Hellenistic Period. Though Apelles' works have not survived, Lucian recorded details of one in his On Calumny: