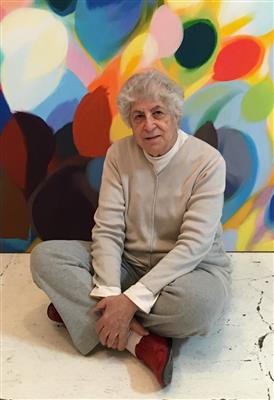 Samia A. Halaby (born 1936, Jerusalem) is an artist, activist, and scholar living and working in New York. Halaby is recognized as a pioneer of abstract painting. Since beginning her artistic career in the late 1950s, she has exhibited in museums, galleries, and art fairs throughout Europe, Asia, North and South America. Her work is housed in public and private collections around the world, including the Solomon R. Guggenheim Museum (New York), the Institut du Monde Arabe (Paris), and the Palestinian Museum (Birzeit).


She received her academic training in the U.S., Halaby and has been active in American academia, teaching art at the university level for over twenty years, a decade of which was spent as an associate professor at Yale School of Art (1972–82) She was the first woman to hold the position of Associate Professor at the Yale School of Art. She also taught at the University of Hawaii, Indiana University, the Cooper Union, the University of Michigan, and the Kansas City Art Institute.


Based in New York since the 1970s, Halaby has long been active in the city's art scene, mainly through independent and non-profit art spaces and artist-run initiatives, in addition, she participated in leftist political organizing for various causes. She has long been an activist for working-class and Palestinian liberation movements.


Halaby was born in Jerusalem in 1936 during the British Mandate of Palestine. She is the daughter of Asaad Halaby and Foutonie Atallah Halaby. Samia has two older brothers, Dr. Sami and Dr. Fouad Halaby, and a younger sister, Dr. Nahida Halaby. Their father was orphaned and, at a young age, had the financial responsibility of supporting his siblings thrust upon him. He began the first taxi service in Jerusalem in the early 1900s, eventually becoming a Principal of Lind & Halaby Ltd., a seller of Goodyear Tire and Rubber Company. Their mother was educated at the Friends School in Ramallah. She was referred to as “the encyclopedia of the family.”


Halaby retains vivid visual memories of her life in Palestine, especially of the trees and leaves in her grandmother Maryam Atallah’s garden in Jerusalem. As a young child Samia would experience synthetic colors and shapes that would correlate with various family members. Her sister was a rounded and yellow/white iridescent Samia was dark metallic red sideways railroad. In 1948, Halaby and her family were violently expelled from their home in the port city of Yafa (Jaffa) in 1948 with the creation of the Israeli state. She was eleven years old. Her family fled to Lebanon, where they resided in Beirut until 1951, when the eventually settled in Cincinnati, Ohio.


Halaby primarily works in abstraction but has also utilized a documentary-style of figurative drawing in more politically oriented works, namely her Kafr Qasm series. She has designed dozens of political posters and banners for various anti-war causes and is featured in the publication "The Design of Dissent". The development of her work over the past fifty years has been closely related to locating the many principles of abstraction in nature utilizing a materialist approach. A number of her paintings have been created by building upon the methods and forms of certain historical applications of abstraction, namely that of the Russian Constructivists and examples of traditional Arabic arts and Islamic architecture. The visual culture of Palestine and its natural setting have also figured into her paintings, as has the dynamism of New York City as experienced in the sights of people in motion and its busy streets