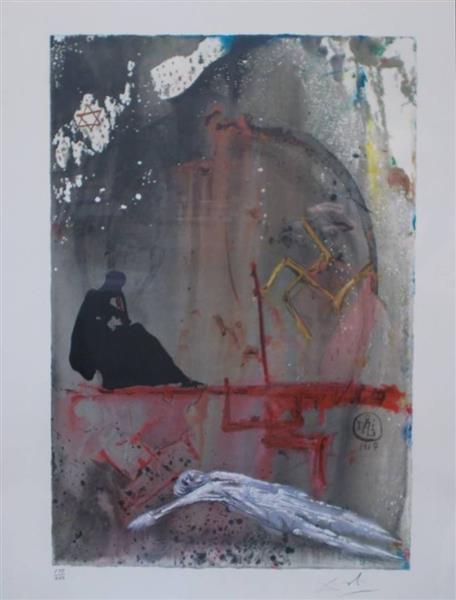 This Original Color Lithograph Edition: 178/250 on Paper is by Salvador Dali (1904-1989). It is part of the series of graphic work entitled Aliyah dates from 1968. The series was commissioned by Shorewood Publishers for the 20th anniversary of the state of Israel in 1967. The set is comprised of 25 mixed-media paintings highlighting important religious, historical and political moments in Jewish history. The series, called “Aliyah, the Rebirth of Israel,” received a special endorsement from Israel’s first Prime Minister, David Ben-Gurion. Shorewood exhibited the original series in a New York museum, but each piece was then sold to private collectors. Their locations remain largely unknown. 250 sets of prints of the collection were made.
Dali did not have a connection to Judaism, but succeeded in grasping the connection between the Bible, the Jewish people and its history, and the land of Israel. Every painting is accompanied by a biblical verse ascribed to each work by the artist. Subjects range from broadly biblical to contemporary.
In order to illustrate the various meanings of the Hebrew word "Aliyah", which means literally "migration to the land of Israel", the artist took inspiration from the Old Testament as well as contemporary history. As usual in Dalí's work, the pieces also contain elements from his own iconography.
This particular lithograph depicts the Holocaust and is traced back to a Psalms 88:7 quotation: “Thou hast laid me in the nethermost pit, in dark places, in the deeps” This quotation from Psalms is fittingly used by Dali in his second distinctly Shoah lithograph. Note the mourning figure, the swastikas, the dead body, the blood, the seated figure in mourning that echoes many such Jeremiah-like images, and the Jewish Star of David.