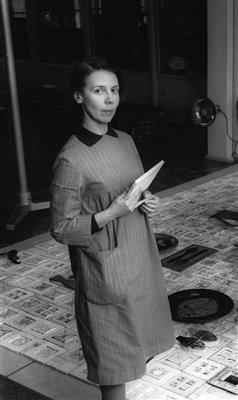 Linnea Rut Bryk (October 18, 1916, in Stockholm – November 14, 1999, in Helsinki) was a Finnish ceramist. She is considered a key reformer of modern Finnish ceramic art.


Bryk's parents were Felix Bryk, an Austrian entomologist, and Aino Mäkinen. Bryk studied graphic art at the Art and the Central School of Helsinki in 1936–1939 and started working in 1942 in the Arabia Factory in Helsinki working with Birger Kaipiainen.
Bryk's early works include graphical designs for greeting cards and book covers, as well as ceramic objects, such as colorful containers, trays and jewelry. In the mid-1940s she made faience plates characterized by pastel colors, and scenes of women in fancy hats, strolls in the park, and young courting. This turn to the idyllic has been interpreted as a response to the horrors of WWII The subjects were figurative, often naive, poetic and glowing in color.


Her work from the late 1940s and 1950s leaves the earlier naivety behind for more complex and expressionistic work. Figures start to be constructed from color fields and raised relief: this way of working created a strong sense of contrast between glazed and unglazed sections. The subject matter also changes, and includes biblical motifs, Gothic and Renaissance architecture.


In the 1960s Bryk's work changes again, as she built large-scale ceramic mosaics meant for public spaces made on individual small tiles. Her previously narrative and figurative subject matter was replaced by geometrical abstraction. She made especially complex compositions, that make use of the three-dimensional nature of tiles and changes in glaze to create patterns with shadow, light and reflection.


Bryk's most famous pieces are the "City in the Sun" (1975), Helsinki City Hall's lobby staircase as well as the seven-paneled wall relief "Ice Flow" (1987–91), displayed in Mäntyniemi, the President of the Republic's official residence.