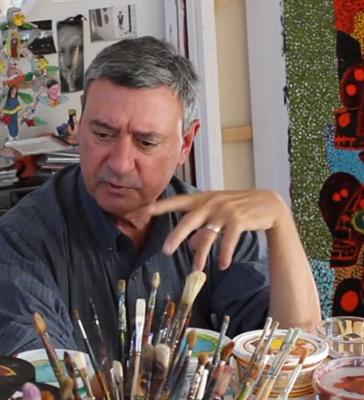 Russ Warren (born 1951) is a contemporary figurative painter who has exhibited extensively throughout the U.S. and abroad, notably in the 1981 Whitney Biennial and the 1984 Venice Biennale. A painter in the Neo-Expressionist style, he has drawn inspiration from Spanish masters such as Velázquez, Goya and Picasso, as well as from Mexican folk art and the American southwest. Committed to his own Regionalist style during his formative years in Texas and New Mexico, he was picked up by Phyllis Kind in 1981. During those years he transitioned to a style characterized by "magical realism", and his work came to rely on symbol allegory, and unusual shifts in scale. Throughout his career, his paintings and prints have featured flat figures, jagged shadows, and semi-autobiographical content. His oil paintings layer paint, often incorporate collage, and usually contain either figures or horses juxtaposed in strange tableaux.


Born in 1951 in Washington, D.C., Russ Warren began his studies under Earl Staley at the University of St. Thomas in Houston from 1969 to 1971 and finished his B.F.A. at the University of New Mexico in 1973. His earliest paintings reveal a dedicated study of the early Modernists, such as Cézanne, Kirchner, Matisse, and, especially, Picasso. Still Life with Hands (1971) displays an impressive mastery of these influences. The cutouts of the artist's own hands, placed centrally within and over newspaper clippings of the day points to an autobiographical component that will resurface periodically in his work. In 1981, Eva Hesse noticed this in her review of his first solo show in New York, calling the works "private autobiographical paintings that create a mystique of the self."


After graduating from the University of New Mexico in 1973, Warren moved into his own studio in Houston (1973-5) and worked again with his mentor at St. Thomas, Earl Staley, on an installation from the Beaumont Art Museum in which he created huge papier-mâché sculptures of Texas Longhorn, oilmen, businessmen, oversized Stuckey's ash trays in the shape of the state, and other Pop-like images.


In graduate school at the University of Texas, San Antonio (1975–77), he participated in a program designed as an equivalent to a Ph.D. for artists. He received his M.F.A. in 1977, after completing an in-depth thesis on Regionalism, beginning with the WPA works of the late 1920s and ‘30s, and continuing through the Chicago, California and Texas art movements of the ‘70s. His belief that an artist did not need to become "mainstream" to "make it" in New York seemed to be upheld when on separate occasions both Marcia Tucker, then director of the New Museum, and Tom Armstrong, then director of the Whitney Museum of American Art, gave him "Best in Show" awards. Their recognition led to his participation in the Whitney Biennial of 1981, gallery representation with Phyllis Kind, and inclusion in the 1984 Venice Biennale, among other important exhibitions.


After moving from his native Texas to Florida and then to Davidson, North Carolina, Warren's Regionalism gave way to what he has dubbed "Funky Figurative," and others have called "mad cap surrealist" (Donald Kuspit), False Image, False Naiveté, New Image, New Wave, and Neo Expressionist art. His repeated trips to Mexico and Spain during these years heightened his interest in folk art and the Spanish masters Velázquez, Goya, and Picasso. His animals and figures, now stripped of all particulars, act and interact as in a strange "Magic Theatre" (Barry Schwabsky), taking part in what seem to be epic passion plays, often hovering in catastrophic spaces produced by his exaggerated use of shadow and perspective.