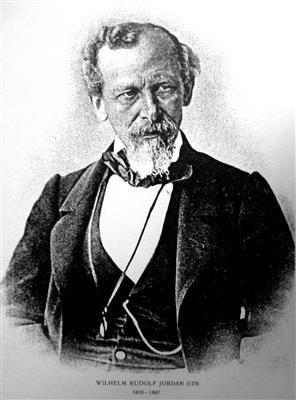 
His father was a member of the Judicial Council and he was a descendant of Charles-Étienne Jordan; advisor to Frederick the Great. After completing his basic artistic studies with Karl Wilhelm Wach at his private school in Berlin, Jordan moved to the Kunstakademie Düsseldorf, where he took master classes with Friedrich Wilhelm Schadow and Karl Ferdinand Sohn. In 1837, he became a member of the Prussian Academy of Arts.


He graduated from the Kunstakademie in 1840 and, from 1848, operated his own studio; creating genre scenes and giving lessons. He is considered to be one of the founders of the ethnographic approach to genre painting. During this time, he was named a "Titularprofessor [de]"; a largely honorary title.


After 1843, following the success of his painting "Heiratsantrag auf Helgoland" (Marriage Proposal in Helgoland), he devoted himself mostly to portraying fisherman and sailors, which involved frequent journeys to Belgium, Holland and France. Many of these works became popular and were widely disseminated as lithographs and engravings.


In 1848, he was one of the founders of "Malkasten", a progressive art society in Düsseldorf. That same year, during the Revolution, he served as a member of the Bürgerwehr (Vigilance committee) under Commander Lorenz Clasen, also a painter by profession.