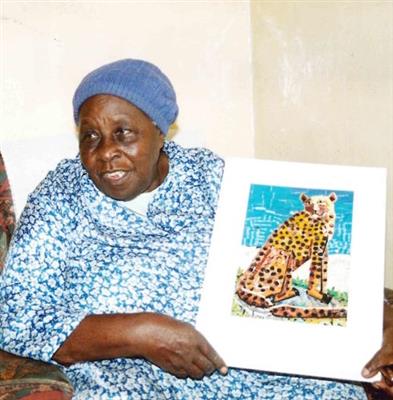 Rosemary Namuli Karuga (19 June 1928 - 9 February 2021) was a Kenyan visual artist. In 2017, she was named Artist of the Month by the National Museums of Kenya. She is known to be the first woman artist to have studied at Makerere University.


Karuga was born in 1928 in Meru, Kenya. She attended Makerere University in Kampala between 1950 and 1952 where she studied design, painting and sculpture. In 2006 she moved to live with family and obtain medical attention in Ireland.She lived there until her death on 9 February 2021.


After completing her education at Makerere University in Kampala, she moved back to Kenya worked as a teacher. She retired from teaching in the 1980s to pursue arts professionally. In 1987, she became an Artist in Residence at the Paa ya Paa Arts Centre in Nairobi. She usually created collage arts using the paper packaging from Rexona soap and Unga flour. In the 1990s she was commissioned to illustrate Amos Tutuola’s magical book, The Palm Wine Drinkard. Subsequently, her collage ‘illustrations’ was exhibited in Paris, London and in the Studio Museum in Harlem, USA.


She got married in 1953 and has since given birth to three children and has grand children.