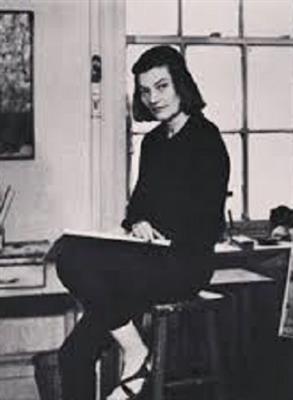 Rosemarie Beck (July 8, 1923 – July 15, 2003) was an Abstract Expressionist, Figurative Expressionist painter in the post-World War II era. She was married to the writer and editor Robert Phelps.


A graduate of Oberlin College with a bachelor's degree in art history (1944), Beck later studied at Columbia University, the Art Students League in New York, The Institute of Fine Arts at New York University, and in workshops with well-known artists Kurt Seligmann and Robert Motherwell. Shortly after graduating from Oberlin in 1944, she moved to Woodstock, N.Y., where she struck up friendships with neighbors Philip Guston and Bradley Walker Tomlin, artists who had an influence on her early work.


In the early part of her career, she was regarded as a member of the second generation of the New York School of abstract expressionists and her work was often exhibited at their annual shows at the Stable and Peridot galleries.
Beck did considered herself an abstract expressionist, and by the late 1950s, she had switched to the figurative focus that she would retain for the rest of her career. Beck described her transition this way: “The ore in my abstract veins had thinned. I thought I would nourish my abstract painting by painting subjects. Then I couldn’t go back. I must have been a secret realist all along because I had never stopped drawing from life.”


Beck became “one of the few painters of our time to treat grand themes in ambitious multi-figure compositions while satisfying a need both for abstract structure and for an execution that embodies energy without being gratuitous,” according to critic Martica Sawin.


Beck taught at Queens College of New York, Vassar College, Middlebury College, the Vermont Studio Center, and the New York Studio School of Drawing, Painting and Sculpture, where she was on the faculty until shortly before she died.