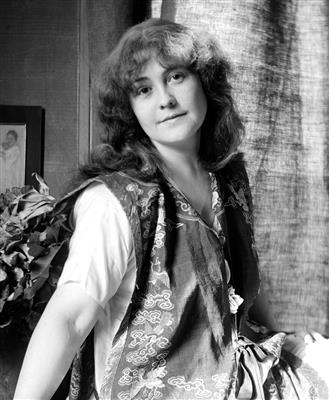 
Rose Cecil O'Neill (June 25, 1874 – April 6, 1944) was an American cartoonist, illustrator, artist, and writer. She built a successful career as a magazine and book illustrator and, at a young age, became the best-known and highest- paid female commercial illustrator in the United States. O' Neill earned a fortune and international fame by creating the Kewpie, the most widely known cartoon character until Mickey Mouse.


The daughter of a book salesman and a homemaker, O'Neill was raised in rural Nebraska. She exhibited interest in the arts at an early age, and sought a career as an illustrator in New York City at age fifteen. Her Kewpie cartoons, which made their debut in a 1909 issue of Ladies' Home Journal, were later manufactured as bisque dolls in 1912 by J. D. Kestner, a German toy company, followed by composition material and celluloid versions. The dolls were wildly popular in the early twentieth century, and are considered to be one of the first mass-marketed toys in the United States.


O'Neill also wrote several novels and books of poetry, and was active in the women's suffrage movement. She was for a time the highest-paid female illustrator in the world upon the success of the Kewpie dolls. O'Neill has been inducted into the National Women's Hall of Fame.


Rose Cecil O'Neill was born on June 25, 1874, in Wilkes-Barre, Pennsylvania. Her parents were William Patrick Henry and Alice Cecilia Asenath Senia Smith O'Neill "Meemie". She had two younger sisters, Lee and Callista, and three younger brothers: Hugh, James, and Clarence. Her father was a bookseller of Irish descent who loved literature, art and theater. Her mother was a gifted musician, actress, and teacher. O'Neill revealed her talents and love for art and writing at a very young age. At thirteen, she entered a children's drawing competition sponsored by the Omaha Herald and won first prize for her drawing, titled "Temptation Leading to an Abyss".


Within two years, O'Neill was providing illustrations for the local Omaha publications Excelsior and The Great Divide as well as other periodicals, having secured this work with help from the editor at the Omaha World-Herald and the Art Director from Everybody Magazine who had judged the competition. The income helped support her family, which her father had struggled to support as a bookseller. O'Neill attended the Sacred Heart Convent school in Omaha.


To help foster his daughter's talents, O'Neill's father brought her to New York in 1893 to help begin her career; they stopped in Chicago en route to visit the World Columbian Exposition where she saw large paintings and sculptures for the first time. She had only seen such work in her father's books. O'Neill was then left to live with the Sisters of St. Regis, a convent in New York City. The nuns accompanied her to various publishers to sell work from her portfolio of sixty drawings. She was able to sell her drawings to numerous publishing houses and began taking orders for more. Illustrations by O'Neill were featured in a September 19, 1896, issue of True magazine, making her the first published American woman cartoonist.