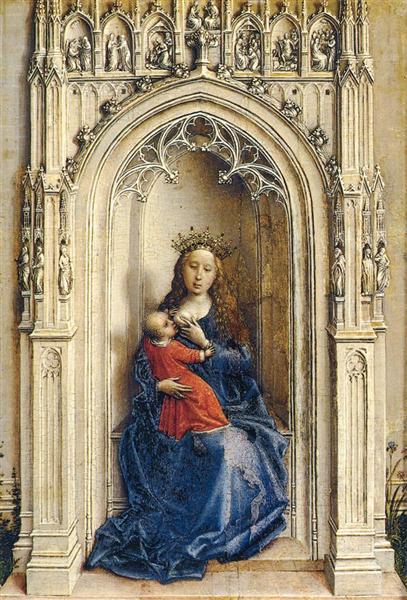 The Virgin and Child Enthroned (also known as the Thyssen Madonna) is a small oil-on-oak panel painting dated c. 1433, usually attributed to the Early Netherlandish artist Rogier van der Weyden. It is closely related to his Madonna Standing, completed during the same period. The panel is filled with Christian iconography, including representations of prophets, the Annunciation, Christ's infancy and resurrection, and Mary's Coronation. It is generally accepted as the earliest extant work by van der Weyden, one of three works attributed to him of the Virgin and Child enclosed in a niche on an exterior wall of a Gothic church. The panel is housed in the Museo Thyssen-Bornemisza in Madrid.

The panel seems to be the left-hand wing of a dismantled diptych, perhaps with the Saint George and the Dragon panel now in the National Gallery of Art, Washington, D.C. As an early van der Weyden, it takes influence from Robert Campin and Jan van Eyck. Van der Weyden served his apprenticeship under Campin, and the older master's style is noticeable in the architecture of the niche, the Virgin's facial type, her exposed breast and the treatment of her hair.

The panel is the smallest extant work by van der Weyden and follows the tradition of a Madonna Lactans, with significant differences. Christ is dressed in a red garment, as opposed to the swaddling he usually wears in 15th-century Virgin and Child portrayals. This is one of two exceptions where he is fully clothed; the other is Robert Campin's Madonna in Frankfurt, where he is shown in blue clothing. Mary's unbound blond hair falls across her shoulders and down across her arms. Showing the influence of Campin, it is brushed behind the ears. She wears a crown as Queen of Heaven and a ring on a finger as the Bride of Christ. Reinforcing this, the blue colour of her robe alludes to her devotion and fidelity to her son. The folds of her dress are reminiscent of the lengthy, crisp, curved intertwined gowns of Gothic sculpture.

The pictorial space is bathed in soft light, probably an influence from Jan van Eyck. The light falls from the right, throwing shadows of both Mary and the Child's heads on the left wall of the niche. The Virgin and Child are shown seated in a small Gothic chapel or oratory projecting from a wall and opening onto a lawn. The painting pays very close attention to small realistic detail; for example, there are four small holes above each arch, likely to hold scaffolding.

As with other early van der Weyden depictions of the Madonna, her head is slightly too large for her body. Her dress is creased and almost paper-like. However, the description of her lap contains inconsistencies also in Campin's Virgin and Child before a Firescreen; it appears to lack volume and is if she had only one leg. This seems to reflect an early difficulty both with foreshortening and in the depiction of a body under clothing.

The chapel is unrealistically small compared to the Virgin; van der Weyden's intention was to emphasise the Virgin's presence while also symbolically representing the Church and the entire doctrine of the Redemption. The panel is one of three surviving of van der Weyden's in which both Madonna and Child are enclosed in this way. However it is unusual in that the niche exists as a separate feature within the picture, compared to the two other works where the enclosure is coterminous with the edge of the painting, almost as part of the frame, a reason why it is thought to predate The Madonna Standing.