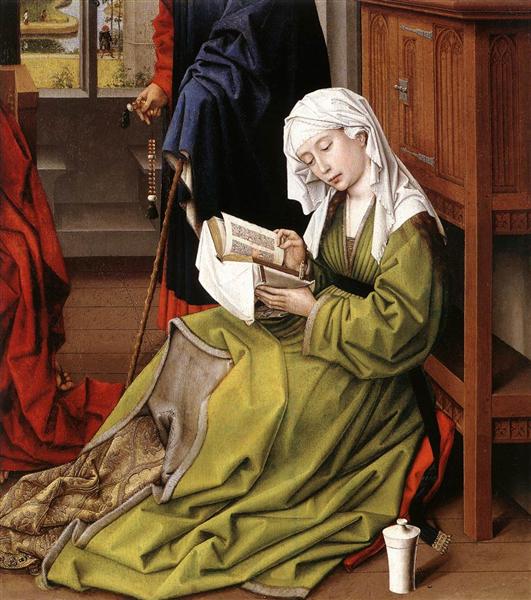 The Magdalen Reading is one of three surviving fragments of a large mid-15th-century oil-on-panel altarpiece by the Early Netherlandish painter Rogier van der Weyden. The panel, originally oak, was completed some time between 1435 and 1438 and has been in the National Gallery, London since 1860. It shows a woman with the pale skin, high cheek bones and oval eyelids typical of the idealised portraits of noble women of the period. She is identifiable as the Magdalen from the jar of ointment placed in the foreground, which is her traditional attribute in Christian art. She is presented as completely absorbed in her reading, a model of the contemplative life, repentant and absolved of past sins. In Catholic tradition the Magdalen was conflated with both Mary of Bethany who anointed the feet of Jesus with oil and the unnamed "sinner" of Luke 7:36–50. Iconography of the Magdalen commonly shows her with a book, in a moment of reflection, in tears, or with eyes averted.

The background of the painting had been overpainted with a thick layer of brown paint. A cleaning between 1955 and 1956 revealed the figure standing behind the Magdalene and the kneeling figure with its bare foot protruding in front of her, with a landscape visible through a window. The two partially seen figures are both cut off at the edges of the London panel. The figure above her has been identified as belonging to a fragment in the Museu Calouste Gulbenkian, Lisbon, which shows the head of Saint Joseph, while another Lisbon fragment, showing what is believed to be Saint Catherine of Alexandria, is thought to be from the same larger work. The original altarpiece was a sacra conversazione, known only through a drawing, Virgin and Child with Saints, in Stockholm's Nationalmuseum, which followed a partial copy of the painting that probably dated from the late 16th century. The drawing shows that The Magdalen occupied the lower right-hand corner of the altarpiece. The Lisbon fragments are each a third of the size of The Magdalen, which measures 62.2 cm × 54.4 cm (24.5 in × 21.4 in).

Although internationally successful in his lifetime, van der Weyden fell from view during the 17th century, and was not rediscovered until the early 19th century. The Magdalen Reading can first be traced to an 1811 sale. After passing through the hands of a number of dealers in the Netherlands, the panel was purchased by the National Gallery, London, in 1860 from a collector in Paris. It is described by art historian Lorne Campbell as "one of the great masterpieces of 15th-century art and among van der Weyden's most important early works."

Mary Magdalene as depicted in early Renaissance painting is a composite of various biblical figures. Here, she is based on Mary of Bethany, who is identified as the Magdalene in the Roman Catholic tradition. Mary of Bethany sat at Jesus' feet and "listened to His Word", and thus is seen as a contemplative figure. The counterpoint is Mary's sister Martha who, representative of the active life, wished that Mary would help her serve. Mary is shown by van der Weyden as youthful, sitting in quiet piety with her head tilted and eyes modestly averted from the viewer. She is absorbed in her reading of a holy book, the covers of which include a chemise of white cloth, a common form of protective binding. Four coloured cloth bookmarks are tied to a gold bar near the top of the spine. According to Lorne Campbell, the manuscript "looks rather like a 13th-century French Bible" and is "clearly a devotional text". It was rare for contemporary portraits to show women reading, and if the model herself could read then she was likely from a noble family.