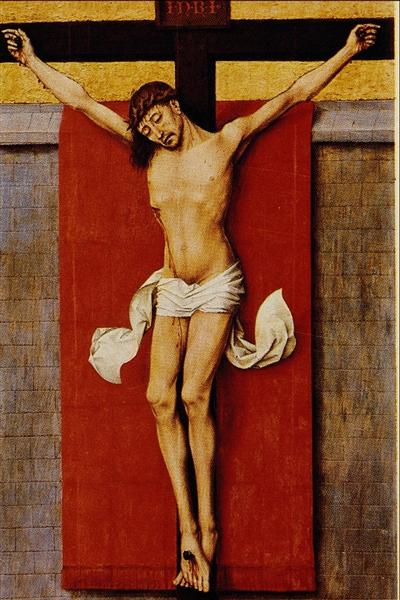 Crucifixion Diptych — also known as Philadelphia Diptych, Calvary Diptych, Christ on the Cross with the Virgin and St. John, or The Crucifixion with the Virgin and Saint John the Evangelist Mourning — is a diptych by the Early Netherlandish artist Rogier van der Weyden, completed c. 1460, today in the Philadelphia Museum of Art. The panels are noted for their technical skill, visceral impact and for possessing a physicality and directness unusual for Netherlandish art of the time. The Philadelphia Museum of Art describes work as the "greatest Old Master painting in the Museum."

The painting's provenance prior to the mid-19th century is unknown. Its extreme starkness has led art historians to theorize that it was created as a devotional work, possibly for a Carthusian monastery. It is not known if the panels comprised a self-contained diptych, two-thirds of a triptych, or originally were a single panel. Some art historians have mentioned that the work seems unbalanced overall and lacking symmetry (which might indicate a missing panel or panels). Recent scholarship proposes that the panels functioned as the outer shutters of a carved altarpiece.

The background to the panels is unknown. Scholars have theorized that they could be the left and center panels of a triptych, that they formed either the wings or shutters of an altarpiece, or that they were intended to decorate an organ case. The train of the Virgin's robe continues onto the right panel, which evidences that the panels were intended to lay side-by-side rather than separated (as the wings of an altarpiece would have been). Art historian E. P. Richardson proposed that they were the center panel of the lost Cambrai altarpiece (executed between 1455 and 1459), a single painting now split into two parts.

Art historian Penny Howell Jolly was the first to propose that the diptych was painted for an unnamed Carthusian monastery. Carthusians lived a severely ascetic existence: absolute silence, isolation in one's cell except for daily Mass and Vespers, a communal meal only on Sundays and festival days, bread and water on Mondays, Wednesdays and Fridays, clothes and bedding of the coarsest materials. Van der Weyden's son Cornelis entered the Carthusian Monastery of Herrines about 1449, and was invested in the order in 1450. The artist donated money and paintings to the order during his lifetime, and made a bequest to it in his will. His only daughter Margaretha became a Dominican nun. Art historian Dirk de Vos describes the diptych as a "monastically inspired devotional painting" whose composition was "largely determined by the scetic worship of the Carthusians and Dominicans."

In a paper presented at the 2006 convention of the Historians of Netherlandish Art, Philadelphia Museum of Art conservator Mark S. Tucker observed that the wooden panels were unusually thin. Across the back of each, he found a horizontal line of dowel holes near the base, which strongly indicated a now-missing structural member. He compared this with similar joinery on the shutters of altarpieces, and theorized that the diptych represented two panels of a four-panel work – either the two-panelled left shutter of an altarpiece, or its center two panels. Based on pictorial style, Tucker argued that the large size of the human figures relative to the size of the panels was more in keeping with figures on the shutters of carved altarpieces than painted ones. He also noted that the shutters of carved altarpieces tend to de-emphasize the deep perspective commonly seen in painted altarpieces, which was consistent with the shallow pictorial space of the diptych.