{{selectedLanguage.Name}}
Sign In Sign out
Action History
×
Home/ Artists / Minimalism .../ Robert Mangold/ Circle In and Out of a Polygon 2 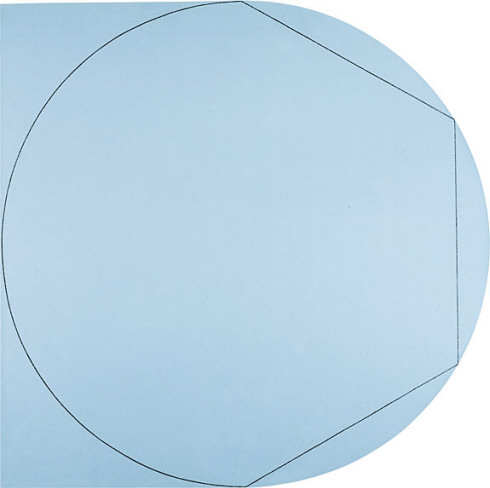 Circle In and Out of a Polygon 2

Shortly after receiving an M.F.A. from Yale University in 1963, Robert Mangold worked as a guard at the Museum of Modern Art in New York. Reminiscing about the months he spent there, Mangold commented that even the greatest paintings began to lose their appeal after hours of uninterrupted viewing. The Mondrians were the exception, however, and actually looked “better and better over time.”

Inspired, perhaps, by Piet Mondrian’s reductivist tendency, Mangold emptied his painting of all external references, focusing instead on internal formal relationships. For this reason, his work is often described as Minimalist. But whereas much Minimalist painting and sculpture is premised on predetermined, mathematical progressions, rigid configurations, and industrial materials, Mangold’s work is quite unsystematic. The difference between Mangold’s art and that of many of his contemporaries lies in its idiosyncratic, intuitive nature. His geometric compositions are frequently distorted: what appears to be a perfect circle or square drawn on a two-dimensional surface is partially contorted in order to fit within the confines of the shaped canvases. While he has worked in series to explore the various permutations of such designs, Mangold has not limited himself to one specific strategy and often makes unique images. His palette, consisting of warm ochers, saturated blues, olive greens, and chocolate browns, among other hues, is more reminiscent of Italian frescoes than of the cool, detached tones and commercially mixed colors commonly used by artists associated with Minimalism.

In 1973 Mangold created at least four versions of Circle In and Out of a Polygon; two were executed on canvas and two on Masonite. In all four the interior graphite line becomes interchangeable with the top, left, and bottom borders of the support. Similarly, half of the circle is outlined on the acrylic surface, while the other half continues as the curved edge on the painting’s right. Mangold challenges his viewers to mentally reverse such images in order to comprehend the compositional nuances of the geometric abstraction. It is this emphasis on the conceptual basis of vision that truly links Mangold to the Minimalists, who brought their audiences to an unprecedented level of perceptual awareness. (Nancy Spector)