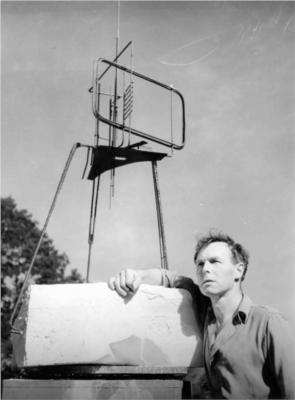 Reginald Cotterell Butler (28 April 1913 – 23 October 1981) was an English sculptor. He was born in Buntingford, where his father was Master of the Buntingford Union Workhouse. He studied and lectured at the Architectural Association School of Architecture in London from 1937 to 1939. Butler was a conscientious objector during the Second World War, being exempted from military service conditional upon setting up a small blacksmith business repairing farm implements. After winning the 'Unknown Political Prisoner' competition in 1953 he became one of the best known sculptors during the 1950s and 1960s, and also taught at the Slade School of Art.

Butler's later work consists of lifelike models of female figures, such as Girl on a Round Base, that have something in common with Hans Bellmer and the sculpture of Allen Jones and prefigure the work of Ron Mueck.

Many of his works are held by the Museum of Modern Art in New York City and Tate Gallery in London.

He died in Berkhamsted.