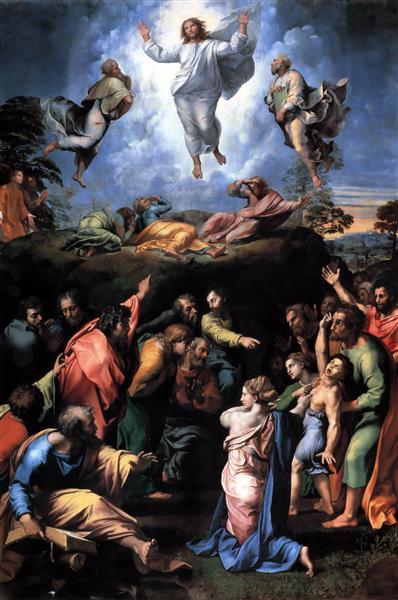 Considered the last painting by Raphael, The Transfiguration was incomplete at the time of his death. It is generally thought that Raphael’s pupil, Giulio Romano, completed the rest of the painting in 1520. Raphael began the high altarpiece in 1516, which was commissioned by Cardinal Giulio de Medici, who later became Pope Clement VII. At the time it was commissioned, Raphael was busy with many other works, so de Medici commissioned another work, The Raising of Lazarus, to make him work faster. After Raphael’s death, de Medici kept the painting, which later taken by French troops to Paris in 1797. It was retuned in 1815, however, and it has been safe at the Vatican, its present location, ever since.

The Transfiguration is the last painting by the Italian High Renaissance master Raphael. Commissioned by Cardinal Giulio de Medici, the later Pope Clement VII (1523–1534) and conceived as an altarpiece for the Narbonne Cathedral in France, Raphael worked on it until his death in 1520. The painting exemplifies Raphael's development as an artist and the culmination of his career. Unusually for a depiction of the Transfiguration of Jesus in Christian art, the subject is combined with an additional episode from the Gospels in the lower part of the painting.

The Transfiguration stands as an allegory of the transformative nature of representation. It is now in the Pinacoteca Vaticana in Vatican City.

By December 1516, the latest date of commission, Cardinal Giulio de Medici, cousin to Pope Leo X (1513–1521), was also the Pope's vice-chancellor and chief advisor. He had been endowed with the legation of Bologna, the bishoprics of Albi, Ascoli, Worcester, Eger and others. From February 1515, this included the archbishopric of Narbonne. He commissioned two paintings for the cathedral of Narbonne, The Transfiguration of Christ from Raphael and The Raising of Lazarus from Sebastiano del Piombo. With Michelangelo providing drawings for the latter work, Medici was rekindling the rivalry initiated a decade earlier between Michelangelo and Raphael, in the Stanze and Sistine Chapel.

From 11 to 12 December 1516, Michelangelo was in Rome to discuss with Pope Leo X and Cardinal Medici the facade of the Basilica of San Lorenzo in Florence. During this meeting, he was confronted with the commission of The Raising of Lazarus and it was here that he agreed to provide drawings for the endeavour, but not to execute the painting himself. The commission went to Michelangelo's friend Sebastiano del Piombo. As of this meeting the paintings would become emblematic of a paragone between two approaches to painting, and between painting and sculpture in Italian art.

An early modello for the painting, done in Raphael's studio by Giulio Romano, depicted a 1:10 scale drawing for the Transfiguration. Here Christ is shown on Mount Tabor. Moses and Eljah float towards him; John and James are kneeling to the right; Peter is to the left. The top of the model depicts God the Father and a throng of angels. A second modello, done by Gianfrancesco Penni, shows a design with two scenes, as the painting was to develop. This modello is held by the Louvre.

The Raising of Lazarus was unofficially on view by October 1518. By this time Raphael had barely started on his altarpiece. By the time Sebastiano del Piombo's work was officially inspected in the Vatican by Leo X on Sunday, 11 December 1519, the third Sunday of Advent, The Transfiguration was still unfinished.

Raphael would have been familiar with the final form of The Raising of Lazarus as early as the autumn of 1518, and there is considerable evidence that he worked feverishly to compete, adding a second theme and nineteen figures. A surviving modello for the project, now in the Louvre (a workshop copy of a lost drawing by Raphael’s assistant Gianfrancesco Penni) shows the dramatic change in the intended work.