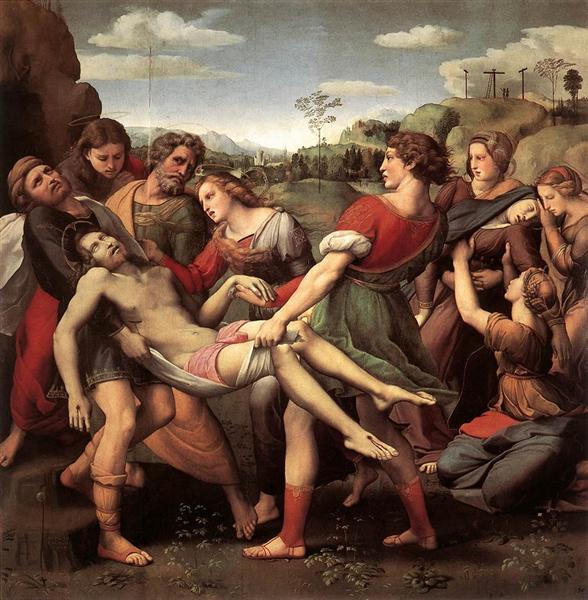 The Deposition, also known as the Pala Baglione, Borghese Entombment or The Entombment, is an oil painting by the Italian High Renaissance painter Raphael. Signed and dated "Raphael Urbinas MDVII (1507)", the painting is in the Galleria Borghese in Rome. It is the central panel of a larger altarpiece commissioned by Atalanta Baglioni of Perugia in honor of her slain son, Grifonetto Baglioni. Like many works, it shares elements of the common subjects of the Deposition of Christ, the Lamentation of Christ, and the Entombment of Christ. The painting is on wood panel and measures 184 x 176 cm.

In the early part of the 16th Century, violence among factions, mostly in the form of hand-to-hand combat, was relatively common in Perugia and other parts of Italy, such as Florence. The Baglioni family were the lords of Perugia and surrounding areas, and also leading condottiere or leaders of mercenary troops. There was an especially bloody episode in Perugia on the night of July 3, 1500, when Grifonetto Baglioni and some angry members of the family conspired to murder much of the rest of the Baglioni family as they slept. According to Matarazzo, the chronicler of the family, following the bloodshed, Grifonetto’s mother Atalanta Baglioni refused to give her son refuge in her home and when he returned to the city he was confronted by Gian Paolo Baglioni, the head of the family who had survived the night by escaping over the roof tops. Atalanta changed her mind and rushed after her son, but arrived only in time to see her son being killed by Gian Paolo and his men. A few years later, Atalanta commissioned the young Raphael to paint an altarpiece to commemorate Grifonetto in the family chapel in San Francesco al Prato. Raphael took the commission very seriously, over the course of two years working on and developing his design through two phases and numerous preparatory drawings. This was the last of several major commissions by the young Raphael for Perugia, the home city of his master Perugino. He had already painted for the same church the Oddi Altarpiece (now in the Vatican) for the Baglioni's great rival family (with whom they were also intermarried), and other large works. The new commission marked an important stage in his development as an artist, and the formation of his mature style. The painting remained in its location until in 1608, it was forcibly removed by a gang working for Cardinal Scipione Borghese, nephew of Pope Paul V. In order to pacify the city of Perugia, the Pope commissioned two copies of the painting from Giovanni Lanfranco and the Cavaliere d’Arpino, and that by Arpino is still in Perugia. Though confiscated by the French in 1797 and exhibited in Paris in the Louvre, then renamed the Napoleon Museum, it was returned to the Galleria Borghese in 1815, except for the predella which was taken to the Vatican Museums.

Raphael made numerous preparatory sketches or drafts as his idea for the composition evolved (several are on Wikimedia Commons - see link below). He started with the subject of a Lamentation over the dead Christ, similar to the famous painting of the same name by his teacher Pietro Perugino. He moved from that idea to an Entombment of Christ, perhaps inspired by an ancient Roman sarcophagus relief of Meleager from Greek mythology, Michelangelo’s Entombment or the print of the Entombment by Mantegna. Looking through his studies, we can see that this long period of evolution gave Raphael the opportunity to put into practice much of the new style and techniques he had been developing from his studies of Renaissance masters Leonardo da Vinci and Michelangelo as well as others artists of the period. The two design phases may broadly be labeled ‘Perugian’ and ‘Florentine’. The significant change of subject from a Lamentation to an Entombment affected the character of the painting on the whole because it changed from a more iconic Pietà to a subject with more narrative interest.