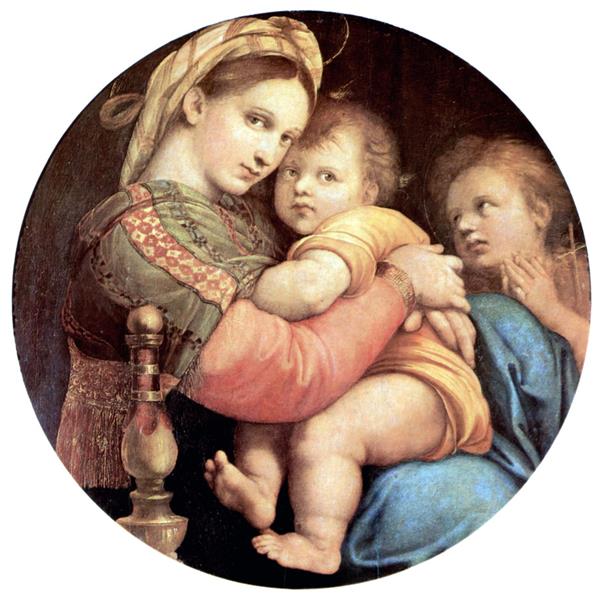 The Madonna della seggiola or Madonna della sedia is a Madonna painting by the Italian renaissance artist Raphael, dating to c. 1513-1514 and housed in the Palazzo Pitti collection in Florence. It depicts Mary embracing the child Christ, while the young John the Baptist devoutly watches.


Painted during his Roman period, this Madonna does not have the strict geometrical form and linear style of his earlier Florentine treatments of the same subject. Instead, the warmer colors seem to suggest the influence of Titian and Raphael's rival Sebastiano del Piombo.


Ingres greatly admired Raphael and paid tribute to him by including this painting in many of his works, such as in the background of Henri IV playing with his children and Raphael and La Fornarina, on the table in front of the subject in his Portrait of monsieur Rivière, and worked into the carpet in Napoleon I on his Imperial Throne. Johann Zoffany also included this painting along with many others in his 1770s painting of the Tribuna of the Uffizi.


Because of the painting's roundness, it became the subject of a legend in which a peasant girl saves a hermit from a pack of wolves in the branches of an oak, and the hermit prophesies that she will become immortalized for her good deed. Years later, the girl had two children, and the tree was made into wine barrels. Raphael happened upon the trio and used a barrel bottom to paint them. This scenario was the subject of an 1839 lithograph by August Hopfgarten and a painting by Johann Michael Wittmer.


In 1858, Nathaniel Hawthorne wrote that the painting was "the most beautiful picture in the world" after having seen it via "a hundred engravings and copies".