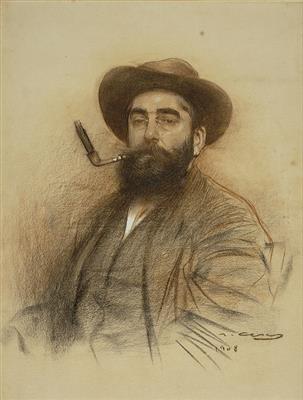 Ramon Casas i Carbó (Catalan pronunciation: [rəˈmoŋ ˈkazəs]; 4 January 1866 – 29 February 1932) was a Catalan artist. Living through a turbulent time in the history of his native Barcelona, he was known as a portraitist, sketching and painting the intellectual, economic, and political elite of Barcelona, Paris, Madrid, and beyond; he was also known for his paintings of crowd scenes ranging from the audience at a bullfight to the assembly for an execution to rioters in the Barcelona streets. Also a graphic designer, his posters and postcards helped to define the Catalan art movement known as modernisme.


Casas was born in Barcelona. His father had made a fortune in Matanzas, Cuba; his mother was from a well-off Catalan family. In 1877 he abandoned the regular course of schooling to study art in the studio of Joan Vicens. In 1881, still in his teens, he was a co-founder of the magazine L'Avenç; the 9 October 1881 issue included his sketch of the cloister of Sant Benet in Bages. That same month, accompanied by his cousin Miquel Carbó i Carbó, a medical student, he began his first stay in Paris, where he studied that winter at the Carolus Duran Academy and later at the Gervex Academy, and functioned as a Paris correspondent for L'Avenç. The next year he had a piece exhibited in Barcelona at the Sala Parés, and in 1883 in Paris the Salon des Champs Elysées exhibited his portrait of himself dressed as a flamenco dancer; the piece won him an invitation as a member of the salon of the Societé d'artistes françaises.


The next few years he continued to paint and travel, spending most autumns and winters in Paris and the rest of the year in Spain, mostly in Barcelona but also in Madrid and Granada; his 1886 painting of the crowd at the Madrid bullfighting ring was to be the first of many highly detailed paintings of crowds. That year he survived tuberculosis, and convalesced for the winter in Barcelona. Among the artists he met in this period of his life, and who influenced him, were Laureà Barrau, Santiago Rusiñol, Eugène Carrière, Pierre Puvis de Chavannes, and Ignacio Zuloaga.


Casas and Rusiñol traveled through Catalonia in 1889, and collaborated on a short book Por Cataluña (desde mi carro), with text by Rusiñol and illustrations by Casas. Returning together to Paris, they lived together at the Moulin de la Galette in Montmartre, along with painter and art critic Miquel Utrillo and the sketch artist Ramon Canudas. Rusiñol chronicled these times in as series of articles "Desde el Molino" ("From the Mill") for La Vanguardia; again Casas illustrated. Casas became an associate of the Societé d'artistes françaises, allowing him to exhibit two works annually at their salon without having to pass through jury competition.


With Rusiñol and with sculptor Enric Clarasó he exhibited at Sala Parés in 1890; his work from this period, such as Plen Air and the Bal du Moulin de la Galette lies somewhere between an academic style and that of the French impressionists. The style that would become known as modernisme had not yet fully come together, but the key people were beginning to know one another, and successful Catalan artists were increasingly coming to identify themselves with Barcelona as much as with Paris.