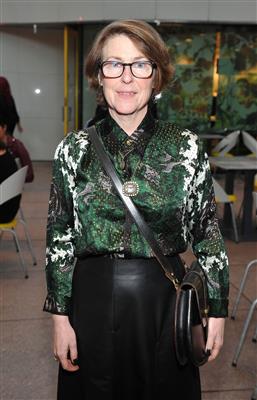 R. H. Quaytman (born 1961) is an American contemporary artist, best known for paintings on wood panels, using abstract and photographic elements in site-specific "Chapters", now numbering thirty-four. Each chapter is guided by architectural, historical and social characteristics of the original site. Since 2008, her work has been collected by a number of modern art museums. She is also an educator and author based in Connecticut.


Rebecca Howe Quaytman was born in Boston, Massachusetts, in 1961. Her mother is the noted American postmodern poet Susan Howe, and her father was abstract painter Harvey Quaytman, well known for geometric works, with over 60 one-person exhibits. Her parents met while studying painting at the School of the Museum of Fine Arts, Boston. The family moved to the SoHo neighborhood of New York City in 1963. When Quaytman was 4, her mother began living with and later married David von Schlegell, an abstract artist and sculptor who became the director of graduate studies in sculpture at Yale University. Quaytman credits both her father and step-father with greatly influencing her development as an artist. Quaytman was an Artist in Residence at Skowhegan School of Painting and Sculpture in 1982, and received a BA from Bard College in 1983.


In 1987 she was hired by PS1, later becoming Program Coordinator for three years. While there, she organized the first US solo exhibition dedicated to pioneering Swedish abstract painter Hilma af Klint, in 1989. She later worked as an assistant to artist Dan Graham. In 1991, she was awarded the Rome Prize allowing a full year of dedicated work. Additionally she studied for one year at the National College of Art & Design in Dublin, Ireland, and later the attended Institut des Hautes Études en Arts Plastiques in Paris to study with Daniel Buren and Pontus Hultén.


In 2005, Quaytman was a founding member and the Director of a cooperative gallery in Manhattan's Lower East Side called Orchard, run by twelve partners, including artists, filmmakers, art historians and curators. Since 2006 she has been on the faculty of Bard College, in Annandale-on-Hudson, New York, teaching painting in the Masters of Fine Arts program, and is frequently a visiting artist, scholar or lecturer at other colleges and museums.


After winning the 1992 Rome Prize, in that year of uninterrupted time to pursue artistic development, Quaytman began to make a series of paintings which belonged together, which she described as "sentences." She cites her epiphany as "The stance of the painting is the profile", after which she thought of her paintings in the context of the audience walking by, grouped together and observed with peripheral vision.


After working as an assistant to Dan Graham, who had been experimenting with time-delay video installations, she began to use photographic images in her work, which she applies with silkscreening. A silkscreen of Graham himself would later be featured in her work. She found the use of silkscreening to be liberating, and cites influence from Rauschenberg, Warhol, Polke and Richter.