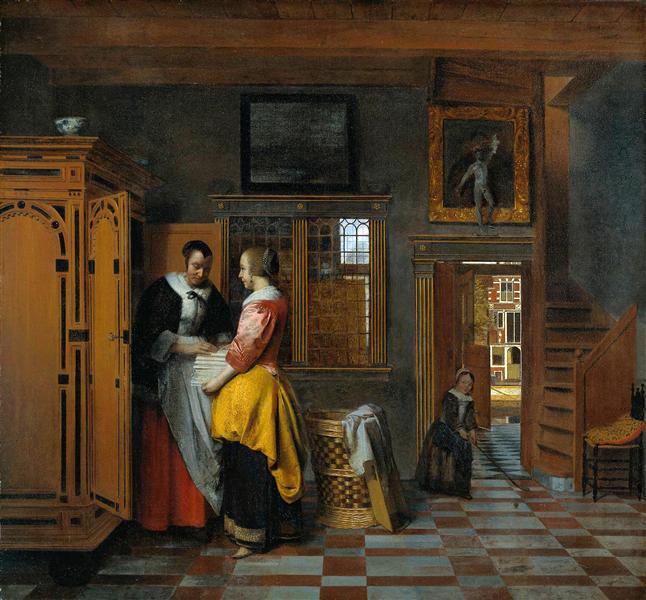 At the Linen Closet

Comparing Pieter de Hooch with Johannes Vermeer seems inevitable. They were contemporaries (De Hooch lived from 1629 to 1684, Vermeer from 1632 to 1675), started their career in the same town (Delft) and both specialized in depicting domestic scenes situated in Dutch interiors.
But while Vermeer’s genre pieces are characterized by a very sensitive, almost mysterious atmosphere, De Hooch presents us the clarity of the perfect household. This is how people in the Dutch Republic liked to see themselves: respectable citizens, living in clean houses that are distinguished, but surely not sumptuous. Everything and everybody in Dutch society had their own, proper place and the domestic interior was a reflection of that, Calvinist-inspired, vision.
This wonderful example, dating from 1663, of De Hooch’s genre pieces also shows his concentration on architectural elements. He used them, together with the tiles, furniture, windows and the postures of the women, to structure the painting and organize its perspective space.
De Hooch’s most effective ‘trick’ to create depth was the typical vista that allows us to catch a glimpse of the house in Dutch Renaissance style, on the other side of the canal in the background. The French writer Marcel Proust, in his famous book In Search of Lost Time, used this extraordinary device to describe the sensation of one of his characters: ‘as in these interiors by Pieter de Hooch which are deepened by the narrow frame of a half-opened door, in the far distance, of a different color, velvety with the radiance of some intervening light.

Two Women Beside a Linen Chest, with a Child (c. 1663) is an oil on canvas painting by the Dutch painter Pieter de Hooch, it is an example of Dutch Golden Age painting and is part of the collection of the Amsterdam Museum, on loan to the Rijksmuseum.

This painting by Hooch was documented by Hofstede de Groot in 1908, who wrote; "25. THE GOOD HOUSEWIFE. Sm. Suppl. 38. ; de G. 13. A woman is putting away linen in a great oak press, inlaid with ebony, which stands to the right in a room. A girl, who, to judge from her fine clothes, is the woman's daughter, is helping her and taking the linen from a large basket. At the back are a high window and an open door, at which stands a child playing with a stick and a ball. A winding staircase and a cushioned chair are seen to the left of the room.

"Although this picture does not possess the brilliant and luminous effect which is so much coveted in this master's works, yet it has the charm of such truth and reality in appearance that it may justly be reckoned among his best works ; the drawing and finishing are singularly perfect" (Sm.). Signed "P. de Hoogh, 1663" ; canvas, 30 inches by 28 inches.