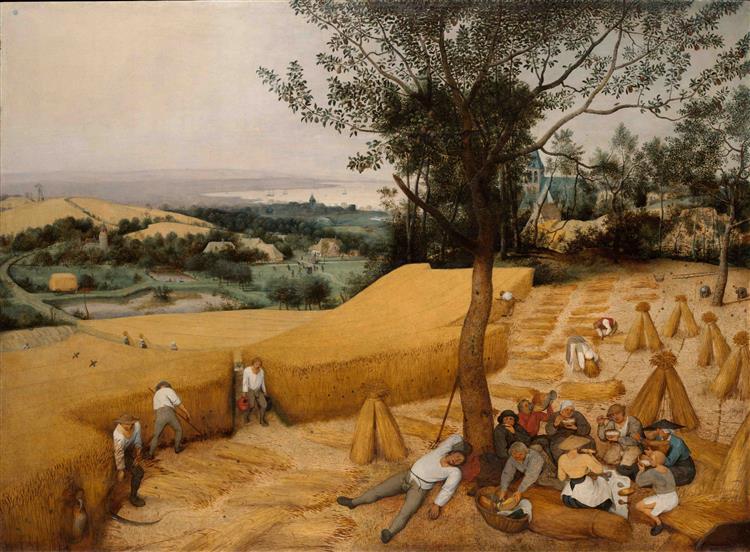 The Harvesters is one of five surviving paintings from a probable group of six, a series commissioned from Bruegel by the wealthy Antwerp merchant Niclaes Jongelinck, apparently as an extensive decorative scheme for the dining room of his suburban home, Ter Beken. The four other paintings of the group are the Gloomy Day, Hunters in the Snow, and the Return of the Herd (all Kunsthistorisches Museum, Vienna), and Haymaking (Lobkowicz Collections, Prague).
Although "16 pieces" by the artist are listed in Jongelinck's 1566 inventory, only two independent works and the Twelff maenden (twelve months) are mentioned by name, suggesting that the series may originally have included twelve paintings. By 1595, however, when the panels were purchased by the city of Antwerp and presented as a gift to Archduke Ernst, they are described as six paintings representing the twelve months. Although the original number of panels remains an open question, most scholars now believe there were only six panels, as scenes that would traditionally have appeared in two separate months in contemporary Calendar series (a theme common in illuminated manuscripts) are included in a single image. This panel is usually identified as representing July–August, or late summer.
Bruegel's drawing Spring (Albertina, Vienna) is inscribed by the artist "De Lenten Meert April Meij," and may resemble in subject the missing panel of the months that presumably represented April-May or early spring.

The Harvesters is an oil painting on wood completed by Pieter Bruegel the Elder in 1565. It depicts the harvest time which most commonly occurred within the months of August and September. Nicolaes Jonghelinck, a merchant banker and art collector from Antwerp, commissioned this painting.

The painting is one in a series of six works, five of which are still extant, that depict different times of the year. As in many of his paintings, the focus is on peasants and their work. Notably, some of the peasants are shown eating while others are harvesting wheat, a diachronic (relating to phenomena such as ideas, language, or culture, as they occur or change over a period of time) depiction of both the production and consumption of food. Pears can be seen on the white cloth in front of the upright sitting woman who eats bread and cheese while a figure in the tree to the far right picks pears. The painting shows a large number of activities representative of the 16th-century Belgian rural life. For example, on the far right a person is shaking apples from the tree. In the center left of the painting, a group of villagers can be seen participating in the blood sport of cock throwing.

The painting has been at the Metropolitan Museum of Art in New York City since 1919. The Metropolitan Museum of Art calls this painting a “watershed in the history of Western art” and the “first modern landscape”. A sense of distance is conveyed by the workers carrying sheaves of wheat through the clearing, the people bathing in the pond, the children playing and the ships far away.

Legendary animation director, Hayao Miyazaki took inspiration from this painting for his short film Mr. Dough and the Egg Princess.