{{selectedLanguage.Name}}
Sign In Sign out
Action History
×
Home/ Artists / Northern Renaissance .../ Pieter Bruegel the Elder/ The Adoration of the Kings 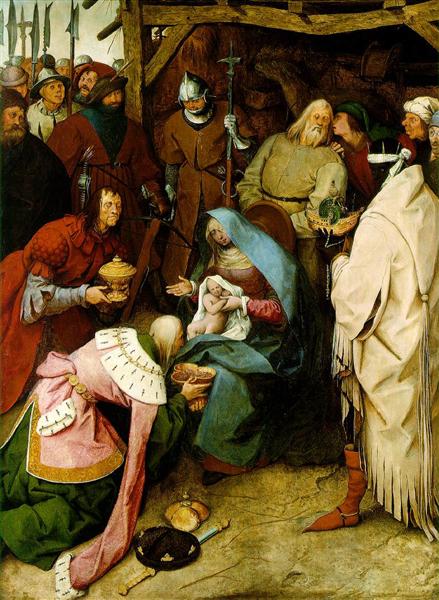 The Adoration of the Kings

In this unusual rendering of the Adoration, the Three Kings presenting their gifts are treated as caricatures and the Virgin is not idealised. The work is composed from a high viewpoint, focusing attention on the Infant Christ on his mother's lap, at the exact centre of the picture. People crowd around them and there is little sense of depth or space. The elongated figures of the Kings are characteristic of a painting style that was fashionable around this time.

A figure on the extreme right wears spectacles. His presence may indicate that those around Christ are blind to his significance; Bruegel has used spectacles on other occasions to signify in an ironic manner the inability of the subject to see the truth. Most of the figures, in fact, appear to be gently mocked by the artist.

It is uncommon for soldiers to be included in a depiction of the Adoration. As in other works by Bruegel, their presence may reflect the Spanish occupation of the Netherlands at this time.

In the chronological sequence of Bruegel's work, this painting of 1564 marks an important departure as the first to be composed almost exclusively of large figures. The group of people, taken from Italian mannerist painters like Parmigianino, permits Bruegel to concentrate on individual faces, giving each a quite distinct, and sometimes grotesque, expression.

This emphasis on the uniqueness of each figure, and Bruegel's lack of interest in depicting ideal beauty in the Italian manner, makes it clear that although borrowing an Italian compositional scheme, Bruegel is putting it to quite a different use. In this treatment, the painter's first purpose is to record the range and intensity of individual reactions to the sacred event.

Below a series of images detailing Bruegel's painting: