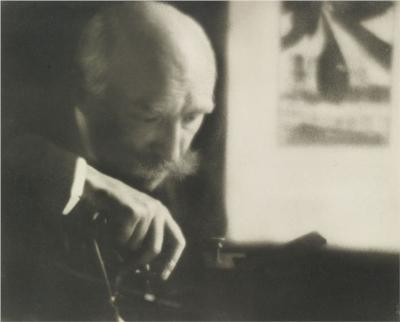 Self-portrait of Dubreuil circa 1909

Pierre Dubreuil (March 5, 1872 - January 9, 1944) was a French photographer, born in Lille, who spent his career in France and Belgium. As a pioneer of modernist photography, Dubreuil embraced innovative techniques and ideas that were celebrated, criticized, and at times, overlooked. Over the course of his career, which was interrupted by both World Wars, Dubreuil's work was shown at the Photo-Club de Paris, the Albright Gallery exhibition in Buffalo, New York, the Little Gallery of the Amateur Photography Magazine in London, and the Royal Photographic Society. In 1988, more than forty years after Dubreuil's death, photographer and collector Tom Jacobson revived interest in his work, seeking out long-forgotten and displaced works that culminated in an exhibition at the Musée d'Art Moderne, Centre Georges Pompidou in Paris (October 28, 1987 - January 5, 1988).

Pierre Dubreuil was born in a wealthy family, well established in the wallpaper trade. In 1888 he joined the Jesuit College of Saint-Joseph in Lille and started to take pictures with a half-plate camera aged sixteen. After serving for three years in the Saint-Omer Dragoons he started working with the photographer Louis-Jean Delton, who was specializing in horse subjects. In 1891 Pierre Dubreuil became a member of the Lille Photographic Society. There he met Robert Pauli who initiated him to the carbon and platinum printing techniques.

Dubreuil's recognition first came in 1896, when his Sombre Clarté ("Dark Clarity") was shown in Brussels. Subsequently, Dubreuil exhibited five prints at the Photo-Club de Paris, and by the turn of the century was internationally acclaimed, even upstaging Constant Puyo and Robert Demachy, the major figures of the Photo-Club de Paris. By the turn of the century, 39 of Dubreuil's works were featured in Annuaire General et International de la Photographie, and German critic Fritz Loescher praised Dubreuil in Photographische Mitteilungen. Few of Dubreuil's works from this period survived; they may have been destroyed by the photographer himself, or destroyed in bombings during the Second World War.

In 1903 Dubreuil was admitted as a member to the Linked Ring Brotherhood in London. This put Dubreuil among the ranks of Alfred Stieglitz, Edward Steichen, F. Holland Day, Frederick H. Evans, and Gertrude Käsebier. In 1904 he began using the bromoil process, which he favored until 1930. This versatile process gave Dubreuil the freedom to control contrast and darken and lighten portions of prints at will. Dubreuil took this new printing process to Paris, where he was influenced by Cubism and Futurism; he became one of the first photographers to explore Modernism in the medium, preceding Alvin Langdon Coburn's "The Octopus" (1912) and the Modernist works of Paul Strand.

In 1910 Dubreuil sent Alfred Stieglitz twelve prints to be considered for Camera Work. Though none were published, six of the prints were exhibited alongside works of other Pictorialists at the International Exhibition of Pictorial Photography at the Albright Gallery in Buffalo, New York. In American Photography, critic F. Austin Lidbury wrote that the stand-out of the exhibition was "six extraordinarily interesting examples of Dubreuil's original, if distorted way of looking at things." In 1912 Dubreuil again implored Stieglitz, sending him five exceptional prints ("Notre Dame de Paris," "Eléphantaisie," "Grand Place Brussels," "Mightiness," and "Cascade, Place de la Concorde"). Although Stieglitz did not include the works in Camera Work (Stieglitz was known for not including more avant-garde and Modernist works in the publication), a 36-page article about Dubreuil by Cyrille Ménard appeared in Photo-Magazine. In the same year, Dubreuil exhibited his first one-man show, of 64 prints, at the Little Gallery of the Amateur Photographer Magazine in London.