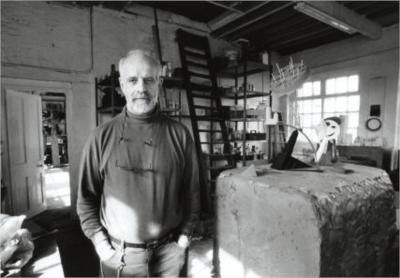 Phillip King PRA (born 1 May 1934) is a British sculptor. He is one of Anthony Caro's best known students, even though the two artists are near contemporaries. Their education followed similar trajectories and they both worked as assistants to Henry Moore. Following the "New Generation" show at the Whitechapel Gallery, both Caro and King were included in the seminal 1966 exhibit, "Primary Structures" at the Jewish Museum in New York representing the British influence on the "New Art". In 2011, his work was represented in the Royal Academy exhibition on Modern British Sculpture which explored British sculpture of the twentieth century.

King was born in Tunis, French Tunisia. While doing his national service before going to Christ's College, Cambridge, he spent much time in Paris where he met many artists. He studied modern languages as Christ's from 1954–57, and sculpture at Saint Martin's School of Art from 1957–58 with Anthony Caro. The next year he spent working as an assistant to Henry Moore and teaching at Saint Martin's.

In 1990, King was made Professor Emeritus of the Royal College and was the President of the Royal Academy of Art from 1999 to 2004, presumably declining the usual knighthood. In 1992 William Feaver wrote in London's Observer that King is "the one sculptor of his generation prepared to jettison what he has proved himself good at in order to explore what cannot be programmed." He took over at a time when the Academy was facing financial trouble and he has said it distracted him from his work.

King proved Feaver correct by turning unexpectedly to Japan and ceramics in 1993 and two years later making the powerful unglazed, vessel-themed works which were the focus of an exhibition in 2004. Richard Cork wrote about the sculptures:

The exhibition was presented in Yorkshire, London, and New York.

One sculpture titled Zen Garden, created by King and students from the Royal College of Art, remains available to see within Tout Quarry, Isle of Portland, Dorset, England.

In 2010, Phillip King was a recipient of the International Sculpture Center's Lifetime Achievement in Contemporary Sculpture Award. He lives and works in London.