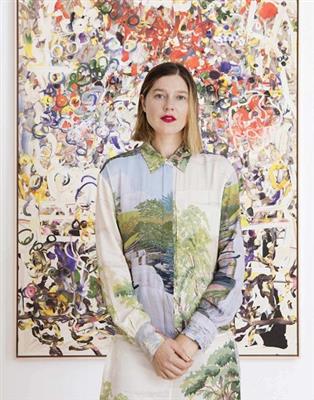 
Petra Cortright was born in 1986 in Santa Barbara, California. Cortright is the daughter of two artists; her father, Steven Cortright, was a sculptor/printmaker and art professor at UC Santa Barbara, and her mother was a painter. She studied at California College of the Arts in San Francisco (2004) and Parsons The New School for Design in New York (2008). She lives and works in Los Angeles, California. She has become renowned for making self-portrait videos that use her computer’s webcam and default effects tools, which she then uploads to YouTube. Cortright is the director, the actor, the editor all at once—allowing her to playfully explore ideas of the self and the body as it is represented in the digital realm, as well as the formal qualities of low-fi, homemade video.


Cortright is well known for her video works presented on YouTube and in gallery environments. Her videos playfully explore formal properties of video software and the representation of physical bodies in digital spaces.


In vvebcam (2007, collection, Museum of Modern Art), her first video, Cortright filmed herself while playing with the special effects features built into the webcam software used to make the video. On Saturday, December 10, 2011, vvebcam (2007) was removed by YouTube because of Cortright's extensive use of "offensive" key words. ‘’Vvebcam’’ is a portrait of the artist as a computer user whose primary mode of existence is recording and being watched.


In 2011 Cortright collaborated with Ilia Ovechkin to create Video Catalog, a work where the monetary value of her videos is determined by an algorithm based on YouTube views.


Cortright was selected to participate in the 2013 Frieze Art Fair in London where she produced her self-portrait, Bridal Shower (2013), a film where she experiments with the physical qualities of a production studio. The film was subsequently broadcast on British public television station Channel 4.


In 2014, Cortright began a collaboration with fashion designer Stella McCartney, creating a series of videos where Cortright uses glitches and video manipulation to showcase and contrast patterns on the garments designed by McCartney that she models.


Cortright also makes intricate paintings using digital software which blend figurative and abstract elements, which are printed on a variety of materials—most frequently linen, paper, and aluminum. Each of Cortright's paintings begin with a digital file which the artist refers to as a "mother file," which consists of hundreds of Photoshop layers, composed by sampling found images and simulating brushstrokes through the use of digital tools. Those layers are then manipulated to produce an arrangement that is transferred to a substrate through industrial print processes. Often her works are titled to reflect file names and extensions, as well as search terms used to source found imagery.