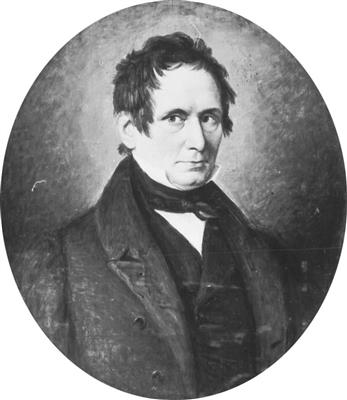 Peter von Cornelius (23 September 1783, Düsseldorf – 6 March 1867, Berlin) was a German painter; one of the main representatives of the Nazarene movement.

Cornelius was born in Düsseldorf. From the age of twelve he attended drawing classes at the Düsseldorf Academy. His father, who was superintendent of the Düsseldorf gallery and professor at the academy, died in 1799, after which Cornelius supported his family by his work as a portraitist and illustrator. In a letter to the Count Raczynski he wrote:

His earliest major work was the decoration of the choir of the church of St Quirinus at Neuss, commissioned by Canon Wallraff of Cologne in 1803. In 1809 he began a series of drawings illustrating Goethe's Faust, the first part of which had been published the previous year. For these Cornelius employed a linear style much influenced by a facsimile edition of Dürer's prayer book for Maximilian I. Six of the images were shown to the poet, who approved of them. Cornelius continued the series following his move to Rome, and it was published in twelve engravings between 1816 and 1826, under the title Bilder zu Goethe's Faust. He moved to Frankfurt in 1809, and worked there until going to Rome two years later.


Cornelius arrived in Rome on 14 October 1811, and soon became one of the most promising of the Lukasbund or "Nazarene Brotherhood", a group of young German artists resident in the city, which included Johann Friedrich Overbeck, Friedrich Wilhelm Schadow, Philipp Veit, Julius Schnorr von Karolsfeld and Ludwig Vogel, a fraternity (some of whom selected a ruinous convent for their home) who had banded together for resolute study and mutual criticism. At Rome Cornelius participated, with other members of the brotherhood, in the decoration of the Casa Zuccari (the residence of Jakob Salomon Bartholdy, the Prussian consul general), and the Villa Massimi, while at the same time also working on designs for the illustration of the Nibelungenlied.


In 1819 Cornelius left the frescoes at the Villa Massimi unfinished and returned to Germany, having been summoned to Munich by the crown-prince of Bavaria, later King Ludwig I, to direct the decorations for his new sculpture gallery, the Glyptothek. In 1821 he took on, in addition to his work for Ludwig, the directorship of the Düsseldorf Academy. He soon discovered, however, that attention to such widely separated duties was incompatible with the just performance of either, and so eventually he resigned his post at Düsseldorf, some of his pupils following him to Munich to assist him there. At the death of Director Langer, 1824–5, he became director of the Munich Academy.


The fresco decorations of the Ludwigskirche in Munich, which were for the most part designed and executed by Cornelius, were perhaps the most important mural works of their time. The large fresco of the Last Judgment, over the high altar in that church, measures 62 feet (19 m) in height by 38 feet (12 m) in width.
The frescoes of the Creator, the Nativity, and the Crucifixion in the same building are also upon a large scale. Other major works in Munich included his decorations in the Pinakothek and in the Glyptothek; those in the latter building, in the hall of the gods and the hall of the hero-myths, are perhaps the best known. In about 1839–40 he left Munich for Berlin to work on a series of cartoons, depicting the Apocalypse, for a cycle of frescoes commissioned by Frederick William IV for a proposed "Campo Santo" or royal mausoleum in Berlin. The king abandoned his plans following the revolution of 1848, but Cornelius continued to work on the cartoons for the rest of his life.