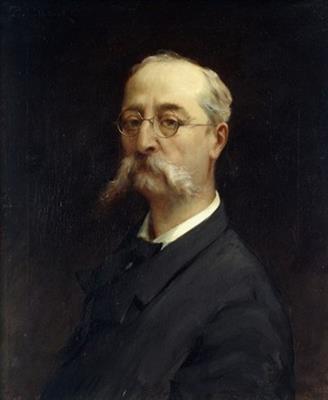 Self-portait of the artist

Paul Désiré Trouillebert (1829 in Paris, France – 28 June 1900 in Paris, France) was a famous French Barbizon School painter in the mid-nineteenth and the early twentieth centuries.


By the 1860s, his interests were shifting towards landscape painting. At the Salon of 1869, he exhibited Au Bois Rossignolet, a landscape painting that was more aligned with his interest in landscapes and received critical acclaim for it. He went on to execute many landscapes that are very close to Corot's late manner of painting. Indeed, the artist first came to public attention when one of his landscapes was sold to Alexandre Dumas’s son as a work by Corot in a celebrated forgery incident. In order to increase the sale value of the work, Trouillebert's signature had been erased and replaced with Corot's signature. In reality, while Trouillebert's landscapes are very similar to Corot, they exhibit their own distinct style.


Trouillebert never confined himself to any single genre. He was a skilled at portraits, landscapes, still-lifes and other subject matter. He was also interested in Orientalist themes and produced paintings of Eastern nudes. He painted a portrait of a half-nude young woman in an ancient Egyptian style of the Greco-Roman Dynasty. He called it Servante du harem (The Harem Servant Girl). In 1884, his painting of nudes, The Bathers was well received by the Paris Salon.